Just Go Down to the Road: A Memoir of Trouble and Travel (Paperback) 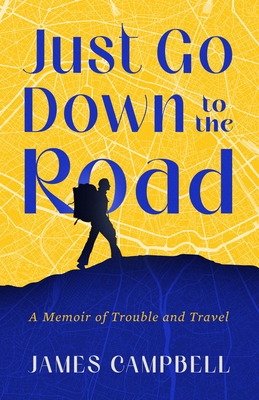 Just Go Down to the Road: A Memoir of Trouble and Travel (Paperback)

"An engrossing account of a young man discovering what he wants to do with his life."--Michael Dirda, Washington Post

"This deftly written memoir . . . is the story of a writer finding his own voice."―The Wall Street Journal "Just Go Down to the Road brings an exciting time in world and literary history to life. It's a remarkable travel account that began with the simple suggestion: 'Just go down to the road, Jim. You'll get a lift .'"―Foreword Reviews "An enthralling and compulsively readable memoir: James Campbell is a marvelously charming teller of his improbable progress from high school dropout to literary critic and intellectual. There is no resisting the humor and modesty, the humanity and tenderness of his vivid account."--Phillip Lopate, author of To Show and to Tell: The Craft of Literary Nonfiction

In Just Go Down to the Road, James Campbell, a native Glaswegian, recounts his years as an incipient juvenile delinquent (arrested for stealing books ) and his young adulthood spent "on the road" in the early 1970s.

After dropping out of school at fifteen, Campbell struggled with family relations and factory work. Soon he threw it all off and went traveling--through Europe, the Near East, and North Africa. His was a bohemian existence; he got along by hitchhiking and trading work for shelter.

In time, Campbell settled back in Scotland. Long a reader and writer, he began working for local magazines and attending University. His early encounters with well-known authors including John Fowles and James Baldwin set him on his true path, which took him to the position of long-time writer of the NB column for the Times Literary Supplement. Just Go Down to the Road ends as Campbell gets his first book deal, and, after an unlikely start and unorthodox education, begins to find his place in the world of literature.

James Campbell was born in Glasgow. Between 1978 and 1982, he was the editor of the New Edinburgh Review. His books include Invisible Country: A Journey through Scotland (1984), Gate Fever: Voices from a Prison (1986), Talking at the Gates: A Life of James Baldwin (1991), and a collection of essays, Syncopations (2007). For many years he was an editor and columnist at the Times Literary Supplement. He lives in London.