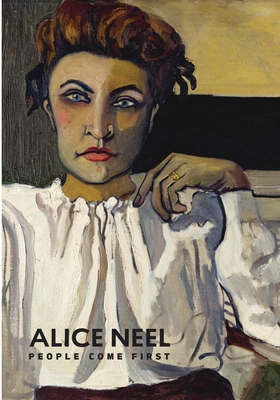 
On Our Shelves Now at:
Positioning Alice Neel as a champion of civil rights, this book explores how her paintings convey her humanist politics and capture the humanity, strength, and vulnerability of her subjects

“One of the most ambitious and thorough collections of Neel’s work to date.”—Allison Schaller, Vanity Fair

“For me, people come first,” Alice Neel (1900–1984) declared in 1950. “I have tried to assert the dignity and eternal importance of the human being.” This ambitious publication surveys Neel’s nearly 70-year career through the lens of her radical humanism. Remarkable portraits of victims of the Great Depression, fellow residents of Spanish Harlem, leaders of political organizations, queer artists, visibly pregnant women, and members of New York’s global diaspora reveal that Neel viewed humanism as both a political and philosophical ideal. In addition to these paintings of famous and unknown sitters, the more than 100 works highlighted include Neel’s emotionally charged cityscapes and still lifes as well as the artist’s erotic pastels and watercolors. Essays tackle Neel’s portrayal of LGBTQ subjects; her unique aesthetic language, which merged abstraction and figuration; and her commitment to progressive politics, civil rights, feminism, and racial diversity. The authors also explore Neel’s highly personal preoccupations with death, illness, and motherhood while reasserting her place in the broader cultural history of the 20th century.

Kelly Baum is Cynthia Hazen Polsky and Leon Polsky Curator of Contemporary Art, and Randall Griffey is curator of modern and contemporary art, both at The Metropolitan Museum of Art.