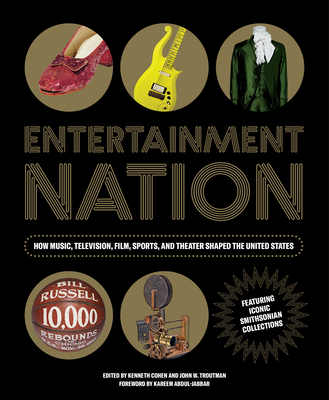 
On Our Shelves Now at:
US history gets the star treatment with this essential guide to the Smithsonian's first permanent exhibition on pop culture, featuring objects like Muhammad Ali’s training robe, and Leonard Nimoy’s Spock ears, and Dorothy’s ruby slippers, oh my!

Entertainment Nation is a star-studded and richly illustrated book celebrating the best of 150 years of US pop culture. The book presents nearly 300 breathtaking Smithsonian objects from the first long-term exhibition on popular culture, and features contributors like Billie Jean King, Ali Wong, and Jill Lepore. Entertainment Nation offers the glitz and glamour of Hollywood, the passion and grit of star athletes, the limelight of the music industry and theater, and the amazing entertainers we love to watch, with dazzling cultural touchstones like:

The book includes essays that contextualize the objects’ place in time and history, exploring how entertainment sparks conversation and debate, reveals social tensions and political power, and dictates who gets to be the hero or the villain. Taking a nostalgic look at old favorites and an exhilarating glimpse of contemporary attractions, Entertainment Nation is a love letter to pop culture.
KENNETH COHEN is Edward and Helen Hintz Secretarial Scholar and Curator at NMAH. His work on the intersection of politics, theater, and sport has appeared in academic and popular outlets such as NPR, Slate, and The Washington Post. JOHN W. TROUTMAN is curator of American music at the Smithsonian's National Museum of American History and project director for the Entertainment Nation exhibit.


BOOKLIST
"This lively and interesting book turns a spotlight on nearly 300 key artifacts (a fraction of the
more than a million objects in the Smithsonian's collection) and sets them in social and historical
context through a series of essays. [...] With this book in hand, those unable to visit the Smithsonian in person can enjoy these national treasures."

NEIL'S ENTERTAINMENT PICKS
How powerful is the influence of entertainment? Pretty potent, according to Entertainment Nation (Smithsonian), an engrossing dive into the wide-ranging effects of movies, TV, music and spectator sports. The handsome volume includes 225 photos of artifacts from the Smithsonian’s pop culture collection, including Frank Sinatra‘s bowtie, Cyndi Lauper‘s dress and a costume from The Handmaid’s Tale. -Neil Pond, former Entertainment Editor at Parade