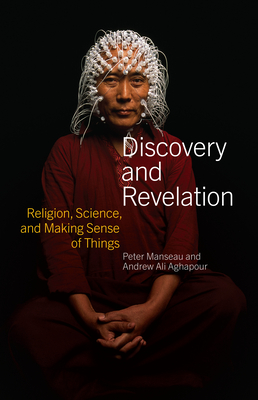 
On Our Shelves Now at:
An illustrated history of how scientific study and religious thought have influenced each other throughout the history of the United States.

Discovery and Revelation explores the evolving relationship between religion, science, and technology in America through the centuries as humans strive to understand the world and their place in it. With at least 40 significant and rarely seen artifacts from the Smithsonian's National Museum of American History, the book highlights the way religious and scientific ideas have influenced each other and informed cultural change.

Religious tradition has often adapted in response to scientific discoveries, while scientists have been motivated to undertake research both because of faith and in opposition to it. Delving deep into this intersection, Discovery and Revelation examines how these two approaches to understanding the world have changed the landscape of American society. It explores scientific advancements through artifacts like:


Discovery and Revelation is a testament to the fascinating and multifaceted nature of faith and knowledge and how they've shaped our nation.
PETER MANSEAU is curator of religious history at the Smithsonian National Museum of American History. The author of numerous books, including Songs for the Butcher's Daughter and Objects of Devotion: Religion in Early America, he writes frequently on religion and history for publications including the New York Times, Atlantic, and Wall Street Journal. ANDREW ALI AGHAPOUR is Consulting Scholar of Religion and Science at the National Museum of American History. A journalist and essayist, he writes frequently about contemporary intersections of science and religion.

BOOKLIST
"Smithsonian National Museum of American History scholars and authors Manseau and Aghapour ask readers to consider that science and religion are intertwined rather than being two separate entities. [...] The authors' avoidance of being preachy adds to the book's approachability as it perfectly toes the line between educational and entertaining."

CHOICE
"This relatively brief study provides a general overview of the topic, so readers will appreciate the material culture visuals used throughout the text as examples of how science has shaped the faith of a nation and how faith has influenced the scientific understanding of some of the US's greatest thinkers and leaders."