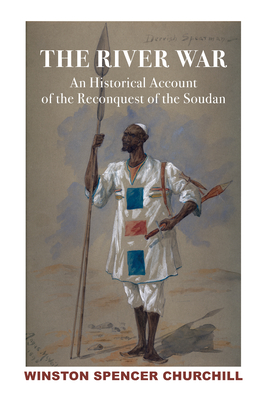 
Special Order—Subject to Availability
Winston Churchill wrote five books before he was elected to Parliament at the age of twenty-five. The most impressive of these books, The River War tells the story of Britain’s arduous and risky campaign to reconquer the Sudan at the end of the nineteenth century. More than half a century of subjection to Egypt had ended a decade earlier when Sudanese Dervishes rebelled against foreign rule and killed Britain’s envoy Charles Gordon at his palace in Khartoum in 1885. Political Islam collided with European imperialism. Herbert Kitchener’s Anglo-Egyptian army, advancing hundreds of miles south along the Nile through the Sahara Desert, defeated the Dervish army at the battle of Omdurman on September 2, 1898.

Churchill, an ambitious young cavalry officer serving with his regiment in India, had already published newspaper columns and a book about fighting on the Afghan frontier. He yearned to join Kitchener’s campaign. But the general, afraid of what he would write about it, refused to have him. Churchill returned to London. With help from his mother and the prime minister, he managed to get himself attached to an English cavalry regiment sent to strengthen Kitchener’s army. Hurriedly travelling to Egypt, Churchill rushed upriver to Khartoum, catching up with Kitchener’s army just in time to take part in the climactic battle. That day he charged with the 21st Lancers in the most dangerous fighting against the Dervish host.

He wrote fifteen dispatches for the Morning Post in London. As Kitchener had expected, Churchill’s dispatches and his subsequent book were highly controversial. The precocious officer, having earlier seen war on two other continents, showed a cool independence of his commanding officer. He even resigned from the army to be free to write the book as he pleased. He gave Kitchener credit for his victory but found much to criticize in his character and campaign.

Churchill’s book, far from being just a military history, told the whole story of the Egyptian conquest of the Sudan and the Dervishes’ rebellion against imperial rule. The young author was remarkably even-handed, showing sympathy for the founder of the rebellion, Muhammad Ahmed, and for his successor the Khalifa Abdullahi, whom Kitchener had defeated. He considered how the war in northeast Africa affected British politics at home, fit into the geopolitical rivalry between Britain and France, and abruptly thrust the vast Sudan, with the largest territory in Africa, into an uncertain future in Britain’s orbit.

In November 1899, The River War was published in “two massive volumes, my magnum opus (up to date), upon which I had lavished a whole year of my life,” as Churchill recalled later in his autobiography. The book had twenty-six chapters, five appendices, dozens of illustrations, and colored maps. Three years later, in 1902, it was shortened to fit into one volume. Seven whole chapters, and parts of every other chapter, disappeared in the abridgment. Many maps and most illustrations were also dropped. Since then the abridged edition has been reprinted regularly, and eventually it was even abridged further. But the full two-volume book, which is rare and expensive, was never published again—until now.

St. Augustine’s Press, in collaboration with the International Churchill Society, brings back to print in two handsome volumes The River War: An Historical Account of the Reconquest of the Soudan unabridged, for the first time since 1902. Every chapter and appendix from the first edition has been restored. All the maps are in it, in their original colors, with all the illustrations by Churchill’s brother officer Angus McNeill.

More than thirty years in the making, under the editorship of James W. Muller, this new edition of The River War will be the definitive one for all time. The whole book is printed in two colors, in black and red type, to show what Churchill originally wrote and how it was abridged or altered later. For the first time, a new appendix reproduces Churchill’s Sudan dispatches as he wrote them, before they were edited by the Morning Post. Other new appendices reprint Churchill’s subsequent writings on the Sudan. Thousands of new footnotes have been added to the book by the editor, identifying Churchill’s references to people, places, writings, and events unfamiliar to readers today. Professor Muller’s new introduction explains how the book fits into Churchill’s career as a writer and an aspiring politician. He examines the statesman’s early thoughts about war, race, religion, and imperialism, which are still our political challenges in the twenty-first century.

Half a century after The River War appeared, this book was one of a handful of his works singled out by the Swedish Academy when it awarded Churchill the Nobel Prize for Literature in 1953. Now, once again, its reader can follow Churchill back to the war he fought on the Nile, beginning with the words of his youngest daughter. Before she died, Mary Soames wrote a new foreword, published here, which concludes that “In this splendid new edition…we have, in effect, the whole history of The River War as Winston Churchill wrote it—and it makes memorable reading.”
One of the most famous political figures of the twentieth century, Sir Winston S. Churchill (1874-1965) was also a well-known historian, biographer, and writer. Among his many books are A History of the English-Speaking Peoples (in four volumes), The World Crisis, 1916-1918 (two volumes), and The Second World War (six volumes).
“…a towering work of scholarship and one of the most remarkable books to appear in many, many years.”
—Andrew Roberts in The Wall Street Journal


“Students of the thought and action of Winston Churchill, the preeminent statesman of the twentieth century, have reason to be grateful for James W. Muller’s Herculean efforts to make the original version of The River War available again. We discover a young soldier and writer who was a philosophically-inclined historian recounting great battles but also thinking about the enduring problems of war, empire, race, and freedom. The tyrannically-minded will be tempted to censor and cancel Churchill’s challenging insights. But the reader who opens himself to Churchill’s monumental work will discover a partisan of Western civilization who can admire the immense courage of the Sudanese Dervishes and who criticizes, like Burke and Macaulay before him, the excesses of empire shorn of mercy and restraint.”
—Daniel J. Mahoney, Augustine Chair, Assumption University

“There is always more to learn from Winston Churchill. James W. Muller’s carefully edited version of The River War gives today’s readers a chance to read Churchill’s eyewitness account, written at age twenty-four, of one of the world’s last cavalry battles at Omdurman in 1898, and his chilling look ahead to the twentieth century and the potentials of Muslim fanaticism.”
—Michael Barone,  Founding co-author, The Almanac of American Politics

“To read The River War is to enter the mind of a brilliant, seemingly fearless young man destined to become one of history’s most unforgettable figures. Until now, however, it has been difficult even to find, let alone to own, an unabridged edition and to read Winston Churchill’s story as he intended to tell it. James W. Muller has not only given readers the original, two-volume book, carefully, thoroughly, and thoughtfully edited, but has written a deeply insightful introduction that adds immeasurable value to a treasured piece of history.”
—Candice Millard, Author of Hero of the Empire

“This book sets a new standard for Churchill scholarship and in doing so tells us much about how Churchill used his words and actions to launch his career.”
—Allen Packwood, Director, Churchill Archives Centre

“I have waited thirty years to hold these volumes in my hands, and it has been well worth the wait. Winston Churchill was awarded the Nobel Prize for Literature, and readers of these volumes will see why. Among Churchill’s books, The River War is in penetration, grandeur, and verve second only to Marlborough: His Life and Times. Now, thanks to Jim Muller’s critical edition, we have the original with its maps and illustrations; notes identifying nearly everyone mentioned in the text; a clear indication of everything the author subsequently dropped, and everything he added to the later, abbreviated editions; and the newspaper articles in draft and as published on which it was based. These volumes are a triumph.”
—Paul A. Rahe, Charles & Louise Lee Chair in the Western Heritage, Hillsdale College