New Realities: Energy Security in the 2010s and the Implications for the U.S. Military (Paperback) 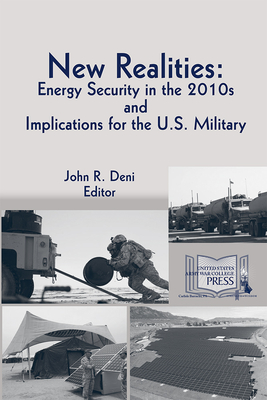 New Realities: Energy Security in the 2010s and the Implications for the U.S. Military (Paperback)


Special Order—Subject to Availability
Evolving energy-based U.S. national interests in Africa or the Middle East may shape the degree to which the U.S. military becomes involved in political or humanitarian crises in those regions. Tightening energy supplies may alter fundamentally the way in which the United States wields military force in a contingency operation. And closer to home, increasingly vulnerable domestic energy infrastructure may undermine military installation operations and security.  The chapters in this edited volume are based on the presentations of those North American and European experts in the areas of policymaking, think tanks, academia, private sector, and military services, that participated in the organized conference, “New Realities: Energy Security in the 2010s and Implications for the U.S. Military.”  held in 2013.

This book would be appropriate for U.S. policymakers, military personnel, especially military leaders, U.S. diplomats, and think tanks that may lobby for energy resources,  energy company producers and exporters, and national security professionals. Students and political scientists that need research materials on the history and growth markets for the U.S. and foreign energy sector may be interested in this book content too.

The Hour of Truth: The Conflict in Ukraine: Implications for Europe's Energy Security and the Lessons for the U.S. Army is available here: https://bookstore.gpo.gov/products/sku/008-000-01170-2

Foreign Relations of the United States, 1969-1976, V. XXXVIII, Part 1, Foundation of United States Foreign Policy 1973-1976 is available here: https://bookstore.gpo.gov/products/sku/044-000-02649-0
ABOUT THE EDITOR:
JOHN R. DENI is a Research Professor of Joint, Interagency, Intergovernmental, and Multinational Security Studies at the Strategic Studies Institute, U.S. Army War College. He previously worked for 8 years as a political advisor for senior U.S. military commanders in Europe. While working for the U.S. military in Europe, Dr. Deni was also an adjunct lecturer at Heidelberg University’s Institute for Political Science where he taught graduate and undergraduate courses on U.S. foreign and security policy, the North Atlantic Treaty Organization (NATO), European security, and alliance theory and practice. He is the author or editor of three books, including Alliance Management and Maintenance: Restructuring NATO for the 21st Century, as well as several peer-reviewed monographs and journal articles.