Historical Introduction to the Private Law of Rome (Paperback) 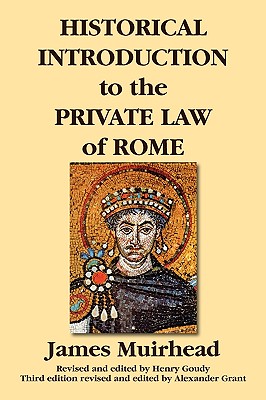 Historical Introduction to the Private Law of Rome (Paperback)


Special Order—Subject to Availability
(This book cannot be returned.)
Reprint of the uncommon third and final edition. This book grew out of an article in the Encyclpedia Brittanica. An "instant classic," it soon became a fixture on reading lists and bibliographies. According to the Law Quarterly Review, "no one who has read the book can have felt any doubt that the author had mastered his authorities, or that he had a singularly wide and profound knowledge of the continental literature dealing with the subject" (15:198). The second and third editions were equally well-received. The third is the best edition because it contains the equally valuable notes of Goudy and Grant. CONTENTS PART I THE REGAL PERIOD CH. I. Social and Political condition of Rome and its population down to the time of Servius Tullius CH. II. Regulatives of public and private order CH. III. Institutions of the private law CH. IV. The Servian reforms PART II THE JUS CIVILE CH. I. Historical events that influenced the law CH. II. The twelve tables CH. III. The private law within and beyond the tables CH. IV. Judicial procedure under the Decemviral system CH. V. The stipulation and the legis actio per condictionem PART III THE JUS GENTIUM AND JUS HONORARIUM (Latter half of the Republic) CH. I. The influences that operated on the law CH. II. Factors of the law CH. III. Substantive changes in the law during the period PART IV THE JUS NATURALE AND MATURITY OF ROMAN JURISPRUDENCE (The Empire until the Time of Diocletian) CH. I. Characteristics and formative agencies of the law during the period CH. II. Jurisprudence CH. III. Substantive changes in the law during the period CH. IV. Judicial procedure PART V THE PERIOD OF CODIFICATION (Diocletian to Justinian) CH. I. Historical events that influenced the law CH. II. Anet-Justinian collections of statute and jurisprudence CH. III. The Justinian law CH. IV. The Justinian law-books APPENDIX ADDITIONAL BY EDITOR OF SECOND EDITION INDEX.