Commentaries on the Conflict of Laws (Hardcover) 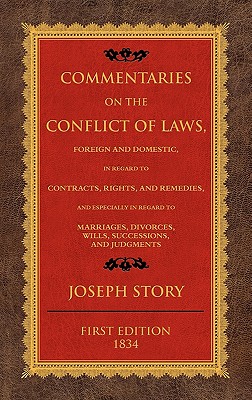 Commentaries on the Conflict of Laws (Hardcover)


Special Order—Subject to Availability
(This book cannot be returned.)
"An Epoch in the Law" The first systematic work on the subject and an indisputable legal classic, Story's Commentaries on the Conflict of Laws synthesized the standard sources of the day, both Anglo-American and Continental, analyzed them with great skill and arranged them in an accessible manner. It was held in high respect in North America, Great Britain and Europe and went through eight editions. Joseph Story 1779-1845] became the youngest Associate Justice of the Supreme Court of the United States in 1811 and in 1829 was appointed the first Dane Professor of Law at Harvard Law School. An important educator who played a key role in the law school's development, he wrote several influential treatises, such as the landmark Commentaries on the Constitution (1833). ..". i]t is not too much to say that its publication constituted an epoch in the law; for it became at once the standard and almost the sole authority... it also] received the honor of being practically the first American law book to be cited as authority in English courts."--Charles Warren, A History of the American Bar 545 CONTENTS List of Authors cited List of Cases cited I. Introductory remarks II. General Maxims of International Jurisprudence III. National Domicil IV. Capacity of Persons V. Marriage VI. Marriage - Incidents to VII. Foreign Divorces VIII. Foreign Contracts IX. Personal Property X. Real Property XI. Wills and Testaments XII. Succession and Distribution XIII. Foreign Guardianships and Administrations XIV. Jurisdiction and Remedies XV. Foreign Judgments XVI. Penal Laws and Offences XVII. Evidence and Proofs Index.