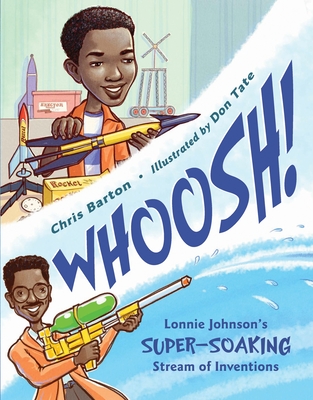 
On Our Shelves Now at:
Celebrate the inventor of the Super Soaker in this inspiring picture book biography about Lonnie Johnson, the maker behind one of the world's favorite toys.


You know the Super Soaker. It’s one of top twenty toys of all time. And it was invented entirely by accident. Trying to create a new cooling system for refrigerators and air conditioners, impressive inventor Lonnie Johnson instead created the mechanics for the iconic toy.

A love for rockets, robots, inventions, and a mind for creativity began early in Lonnie Johnson’s life. Growing up in a house full of brothers and sisters, persistence and a passion for problem solving became the cornerstone for a career as an engineer and his work with NASA. But it is his invention of the Super Soaker water gun that has made his most memorable splash with kids and adults.
Chris Barton is the award-winning, best-selling author of several books for children, including Shark vs. Train (Little, Brown) and The Day-Glo Brothers: The True Story of Bob and Joe Switzer’s Bright Ideas and Brand-New Colors. He lives in Austin, Texas.

Don Tate is an award-winning author and illustrator of many books for children. His illustrated books include The Cart That Carried Martin and Hope's Gift (Putnam). He is also both author and illustrator of It Jes' Happened: When Bill Traylor Started to Draw (Lee & Low) as well as Poet: The Remarkable Story of George Moses Horton (Peach Tree). He lives in Austin, Texas.
♦ A tinkering African-American boy grows up to become the inventor of a very popular toy.
Lonnie Johnson always tinkered with something. As a kid, he built rockets and launched them in the park amid a crowd of friends. (He even made the rocket’s fuel, which once caught fire in the kitchen. Oops.) As an adult he worked for NASA and helped to power the spacecraft Galileo as it explored Jupiter. But nothing is as memorable in the minds of kids as his most famous invention (to date): the Super-Soaker. While testing out a new cooling method for refrigerators, Johnson accidentally sprayed his entire bathroom, and the idea was born. However, the high-powered water gun was not an instant success. Barton shows the tenacity and dedication (and, sometimes, plain good timing) needed to prove ideas. From the initial blast of water that splashes the word “WHOOSH” across the page (and many pages after) to the gatefold that transforms into the Larami toy executives’ (tellingly, mostly white) reactions—“WOW!”—Tate plays up the pressurized-water imagery to the hilt. In a thoughtful author’s note, Barton explains how Johnson challenges the stereotypical white, Einstein-like vision of a scientist.
A delightfully child-friendly and painfully necessary diversification of the science field.
- Kirkus Reviews, starred review

♦ Homemade robots, space probes, pressurized water rifles—the story of African-American inventor Lonnie Johnson is tailor-made for a young audience, and Barton and Tate do it justice in this inspiring account of a man driven toward innovation against the odds. Johnson's interest in engineering blossomed at an early age, and he went on to work on NASA's Galileo project and design what would become the popular Super Soaker water gun. Barton makes clear how Johnson struggled in his unconventional line of work, and also shows the rewards of his persistence. Tate's inviting digital illustrations bring an appropriately playful air to the pages, especially in a foldout spread showing the Super Soaker's blast in all of its glory.
- Publishers Weekly, starred review

This picture book biography tells the story of Lonnie Johnson, kid rocket launcher, teen robot builder, adult NASA engineer, and inventor of the Super Soaker water toy. The story documents his perseverance in overcoming obstacles, some stemming from being African American--a school aptitude test that indicated he was not cut out to be an engineer, the prejudice he and his high-school team experienced while winning the 1968 University of Alabama science fair, and professional doubts concerning his abilities. The narrative also covers his initial failure at becoming a self-employed entrepreneur, remedied only by the hard-won success of the Super Soaker. The text emphasizes the continuing support he received from his family, and the vibrant illustrations are especially effective at capturing expressions and mannerisms that bring Johnson to life (as when Johnson and his fellow Tuskegee Institute students party to a sound and light system constructed from leftover electronics). This upbeat tribute makes an engaging and inspiring addition to STEM collections.
- Booklist

As a child, Lonnie Johnson was a "tinkerer," or an avid collector of pieces and parts--all things that were considered scrap but that to Johnson were perfectly ripe for new applications. Early projects included rockets, a robot, and a powerful sound system for parties. Johnson's engineering degree took him to NASA, where he worked on the Galileo orbiter and probe. What Johnson really wanted to do, however, was build his own inventions. When trying to find an environmentally friendly solution to refrigerator and air-conditioning cooling systems, he stumbled upon what would eventually become his opus, the Super Soaker. Readers follow the many obstacles and setbacks Johnson experienced as he tirelessly worked to launch his invention. The narrative--based primarily on personal interviews the author had with Johnson--adeptly captures the passion and dedication necessary to be an engineer. The cartoonlike illustrations, rendered digitally with Manga Studio, combine child appeal with enough realism to accurately convey various scientific elements. Great care is taken to portray the institutional racism Johnson experienced, such as school tests that tried to dissuade his interest in engineering and his competing in a 1968 science fair in the newly desegregated but unwelcoming University of Alabama. The author's note explains Barton's mission to diversify common perceptions of what scientists and engineers look like and who they can be. This engaging and informative picture book exploration of Johnson's life succeeds in that right. VERDICT Highly recommended for STEM and maker collections.
- School Library Journal

What do a computer memory power backup system and a squirt gun on steroids have in common? Inventor Lonnie Johnson. An avid tinkerer since childhood, Johnson had become the only black high school student by 1968 to advance to the science-fair competition held at the University of Alabama, where his robot Linex took first place. After graduating from Tuskegee, he worked for NASA on the backup power system for the Galileo mission to Jupiter, and then went solo as an inventor. While working on a component for a refrigeration system, he serendipitously fashioned the power blaster that would, years later, become the Super Soaker. While that popular toy has become the public pinnacle of his career, Johnson is still very much in the invention game, currently developing an advanced solar-energy system. Johnson’s story is both delightful and inspiring, featuring a long-suffering family that tolerated his destructive, even explosive, experiments; the financial ups and downs of an entrepreneur; and his solo work and team work. Endpapers point toward a portfolio of inventions that range from “Seriously?” (a musical diaper) to “Wow!” (Johnson Thermoelectric Energy Converter). The text and author’s note, however, offer little more than an enthusiastic outline of a long career, with plenty of research holes left to fill. Why he left NASA to be self-employed, how he survived the financially rough years, and how his green technology work is coming along are all issues about which kids may reasonably ask. Digital artwork is serviceable and should stand up well for a group read aloud. Barton refers to a personal interview with Johnson, but no further source notes are included.
- Bulletin of the Center for Children's Books

From childhood, African American inventor Johnson was a tinkerer: "Lonnie loved building and creating. Ideas for inventions just kept on flowing." We learn about how young Lonnie made model rockets--and rocket fuel ("When it caught fire in the kitchen, Lonnie's mom didn't make him stop. She just sent him to work outside")--and how in 1968 the robot he built won first place at a science fair held at the University of Alabama, "where only five years earlier, African American students hadn't even been allowed." We learn of his college life at Tuskegee Institute (he was known to study even during his own parties, complete with a light-and-sound system he created); his breakthrough engineering work for NASA; and his development of a super-blast water gun. Barton describes Johnson's ups and downs before he finally sold his Super Soaker to a toy company, but the straightforward text has a generally upbeat, you-can-do-it attitude. Tate's clear digital illustrations, with their time-period-appropriate details in decor and clothing (from pegged jeans to bell-bottoms to cut-off shorts with knee socks) help situate readers; there's no timeline provided (or even a birth year for Johnson). An appended note discusses Barton's inspiration--to draw attention to diversity within the scientific community--and encourages readers to "put this book down, step away from the computer screen, and get permission to take something apart." Terrific front and back endpapers provide simple schematics of some of Lonnie Johnson's inventions.
- The Horn Book Magazine

Lonnie grew up in the 1950s with five siblings "squeezed into their parents' small house in Mobile, Alabama." Forever tinkering with spare parts and junkyard scraps, he made rockets from scratch, and even built his own robot named Linex with jukebox switches and his little sister's walkie-talkie: "Lonnie used a tape recorder to program Linex, and as a bonus the reels looked like eyes." (Linex won first place for Lonnie's team at a 1968 University of Alabama science fair.) Lonnie, "a self-confident, insightful, creative thinker," went to college at Tuskegee Institute, then, as an engineer, worked for NASA's Jet Propulsion Laboratory. At NASA, he created a lightweight backup system for the Galileo space probe that photographed Jupiter and its moons.

At home one day, Lonnie was working on a new refrigerator and air-conditioning cooling system, using the faucet in his bathroom sink with a hose, pump and nozzle, when "WHOOSH!"--water sprayed out with such force he decided his contraption "would make a great water gun." He approached toy company after toy company with his invention until finally, he struck gold. Barton's clean, lively prose and Tate's boldly composed, often comical illustrations--including a dramatic gatefold capturing the Super Soaker's mighty trajectory--make Lonnie Johnson's story of passion and persistence whoosh to life.
- Shelf Awareness