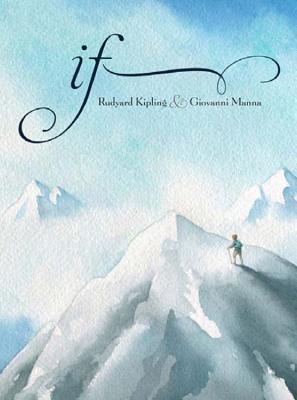 
Not On Our Shelves—Ships in 1-5 Days
When Rudyard Kipling wrote the poem "If—" in 1909, he was addressing his 12-yearold son, John, who would die in battle a few short years later during World War I. The famous author's words soon inspired a nation, and the poem has twice been voted Great Britain's favorite. Italian illustrator Giovanni Manna melds the innocence of childhood with the encouraging sentiments expressed by Kipling's words in this tender portrayal of fatherly advice.
Rudyard Kipling spent the first half of his life shuttling between India, the country of his birth, and England, where he achieved literary fame. He became the first English recipient of a Nobel Prize for Literature in 1907, two years before he wrote "If—."

Giovanni Manna was born in Florence, Italy, and has made illustrations for more than 80 books for children since 1995. He teaches watercolor at the International School of Illustration in Sarmede and was awarded the Andersen Prize for best Italian illustrator in 2003.