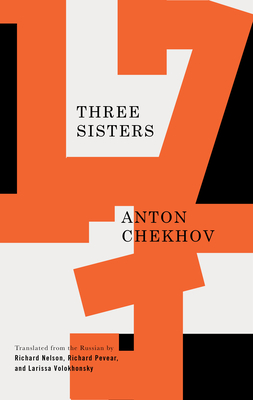 After their father's death, Olga, Masha, and Irina find life in their small Russian town stifling and hopeless. They long to return to Moscow, the bustling metropolis they left eleven years ago, but their brother Andrei's gambling habits have trapped them in their small provincial lives. As the seventh play in the TCG Classic Russian Drama Series, playwright Richard Nelson and translators of Russian literature Richard Pevear and Larissa Volokhonsky continue their collaboration with a masterful new translation of Chekhov's exploration of yearning and disillusionment.

Richard Nelson's many plays include Illyria; The Gabriels: Election Year in the Life of One Family (Hungry, What Did You Expect?, Women of a Certain Age); The Apple Family: Scenes from Life in the Country (That Hopey Changey Thing, Sweet and Sad, Sorry, Regular Singing); Nikolai and the Others; Goodnight Children Everywhere (Olivier Award for Best Play); Franny's Way; Some Americans Abroad; Frank's Home; Two Shakespearean Actors; and James Joyce's The Dead (with Shaun Davey; Tony Award for Best Book of a Musical). Richard Pevear and Larissa Volokhonsky have translated the works of Leo Tolstoy, Fyodor Dostoevsky, Nikolai Gogol, Anton Chekhov, Boris Pasternak, and Mikhail Bulgakov. Their translations of The Brothers Karamazov and Anna Karenina won the PEN Translation Prize in 1991 and 2002, respectively. Pevear, a native of Boston, and Volokhonsky, of St. Petersburg, are married and live in France.