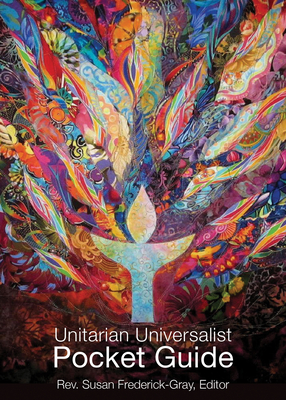 
Special Order—Subject to Availability
This is the most complete introduction to Unitarian Universalism available, covering ministry, worship, religious education, social justice, and history. Extensively revised, the sixth edition prepares readers with resources and information for this crucial moment in Unitarian Universalism. It also gives voice to many individual Unitarian Universalists—people of all ages, coming from many backgrounds and holding many beliefs—as they share their personal and deeply heartfelt testimonies. Contributors include Rosemary Bray McNatt, Erika Hewitt, Cheryl Walker, Jessica York, Elizabeth Nguyen, Aisha Hauser, and Dan McKanan. The foreword was written by lifelong Unitarian Universalist Melissa Harris-Perry—writer, professor, political commentator, and editor-at-large at Elle.com.

Rev. Susan Frederick-Gray is the ninth president of the Unitarian Universalist Association. She was elected in June 2017 to a six-year term after serving congregations in Arizona, Ohio, and Tennessee. After leading the Unitarian Universalist response to Arizona’s anti-immigrant laws in 2010, she became the lead organizer for the Arizona Immigration Ministry, among her other activism activities. She now lives in Massachusetts with her husband, Rev. Brian Frederick-Gray, and their son, Henry.

Melissa Harris-Perry is a lifelong Unitarian Universalist as well as a writer, professor, political commentator, and Editor-at-large at Elle.com.