A Door Made for Me (Hardcover) 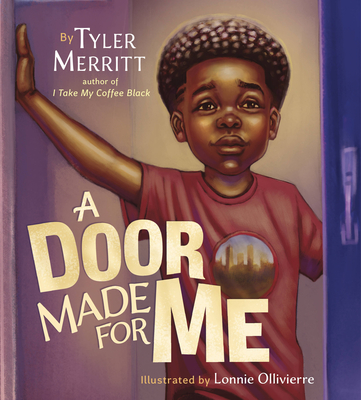 A Door Made for Me (Hardcover)

This emotional and honest picture book explores a racist encounter from the perspective of a young Black boy, while offering a message of unconditional love and acceptance to soothe the pain of blind prejudice.

In this story based on the author's childhood, a young Black boy confronts his first experience of overt racism. In recounting the events to his grandfather, the young narrator asks: “How can she hate me when she doesn’t know me?” Grandpa offers wisdom and encouragement to the child, reminding him that another person’s hate does not change the fact that he is loved and that he matters. While offering an unflinching look at the emotional impact of the encounter, Tyler Merritt presents a message of love and acceptance that will resonate with young readers and offer a starting point for conversations about racial equality between parent or caregiver and child.

Tyler Merritt is an actor, musician, comedian, and activist behind The Tyler Merritt Project. Raised in Las Vegas, he has always had a passion for bringing laughter, grace, and love into any community that he is a part of. For over twenty years, he has spoken to audiences ranging from elementary and Sunday school students to nursing home seniors. His television credits include ABC’s Kevin Probably Saves The World, Netflix’s Messiah and Outer Banks, Disney/Marvel’s Falcon and the Winter Soldier and Apple TV’s upcoming series Swagger. Tyler’s viral videos “Before You Call the Cops” and “Walking While Black” have been viewed by 60 million people worldwide with “Before You Call the Cops” being voted the most powerful video of 2020 by NowThis Politics. He is a cancer survivor and lives in Nashville, Tennessee.

Lonnie Ollivierre is an Atlanta-based illustrator who was born in St. Vincent and the Grenadines. He first experienced the world of art through his father, who was a sign painter. Lonnie’s family relocated to Brooklyn when he was a child, and there he taught himself to paint from comic books he collected. Growing up, he dreamed of becoming a cartoonist, and later a painter. He paints the things that he sees in his everyday life and hopes to inspire, educate, and uplift others through his work.

"A tender tribute to the power of family in bolstering children making their way in an often unkind world."—Kirkus Reviews