Zarifa: A Woman's Battle in a Man's World (Hardcover) 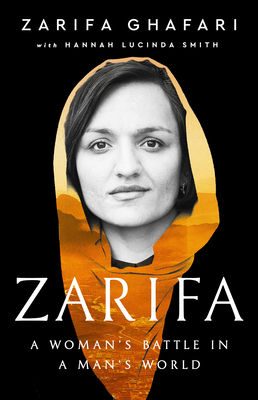 Zarifa: A Woman's Battle in a Man's World (Hardcover)


On Our Shelves Now at:
A poignant memoir by one of Afghanistan's youngest female mayors and the inspiration behind the upcoming Netflix documentary, In Her Hands, executive produced by Hilary Rodham Clinton and Chelsea Clinton.

Zarifa Ghafari was three years old when the Taliban banned girls from schools, and she began her education in secret. She was six when American airstrikes began. She was twenty-four when she became mayor – one of the first female mayors in the country – and first of Wardak, one of the most conservative provinces in Afghanistan. An extremist mob barred her from her office; her male staff walked out in protest; assassins tried to kill her three times. Through it all, Zarifa stood her ground. She ended corruption in the municipality, promoted peace, and tried to lift up women, despite constant fear for herself and her family.  When the Taliban took Kabul in 2021, Ghafari had to flee. But even that couldn’t stop her. Six months later, she returned, to continue her work empowering women.

Zarifa is an astonishing memoir that offers an unparalleled perspective of the last two decades in Afghanistan from a citizen, daughter, woman and mayor.  Written with honesty, pain, and ultimately, hope, Zarifa describes the work she did, the women she still tries to help as they live under Taliban rule, and her vision for how grassroots activism can change their lives and the lives of women everywhere.


Zarifa Ghafari is an Afghan activist, politician and entrepreneur. In November 2019, she became the mayor of Maidan Shahr, the capital city of the Wardak Province, Afghanistan. She is one of the only female mayors in Afghan history and the youngest – appointed at age 26.
As mayor, Zarifa became a role model to women in Afghanistan. She introduced an anti-litter campaign and made a special appeal to the US Secretary of State, Mike Pompeo, to safeguard women’s rights following the uncertainties posed by the Taliban USA negotiations. In 2020, Zarifa was chosen as an International Woman of Courage by the US Secretary of State.


Hannah Lucinda Smith is the author of Erdogan Rising: The Battle for the Soul of Turkey (HarperCollins/William Collins 2019) and is The Times correspondent in Turkey, where she has covered conflicts, a coup attempt, and the rise of controversial president Recep Tayyip Erdogan. During her time in the region, she has also reported on the Middle East, from inside rebel-held Syria, on the front lines of the battle against Isis in Iraq, and joined the mass movement of migrants on their journey to Europe in 2015. She has also worked for the BBC, contributed to the Atlantic and the Spectator, and has been awarded a Pulitzer grant to write for Wired magazine.

“In this earnest and fiery memoir, an activist and politician from Afghanistan recounts how her country’s instability marked her life.”—New York Times

“This is a simply written and inspiring work that zips along with the pace of an adventure story. You can only be left in awestruck admiration at everything Zarifa has already achieved in her short life.”—Geographical

“This is a timely memoir with far-reaching impact.”—Audiofile

“Her self-titled memoir offers her unique perspective on the last two decades in Afghanistan while presenting her vision for how grassroots activism can change the lives of women everywhere.”—Purewow

“Ghafari tells her inspiring life story with sincerity and passion, providing a nuanced and, at times, horrifying glimpse into Afghanistan’s devastating history… A searingly honest, profoundly courageous memoir of one fearless woman’s fight for her homeland.”—Kirkus, starred review

“Frank and impassioned, Ghafari’s narrative spotlights the power of activism… a remarkable story of perseverance and resilience.”—Publishers Weekly

“Anyone wanting to know the grim reality of being a woman in Afghanistan and trying to make a difference could not find a more illuminating book. Zarifa will break your heart.”—Christina Lamb, OBE, chief foreign correspondent, The Sunday Times

“Zarifa’s words, like her life, are an act of courage, weaving heartache with hope. They illuminate all the things we take for granted, especially the ordinary moments, the daily freedoms, and most intimate of relationships. They illuminate the threads that connect our rights, freedoms, and happiness into an interconnected whole.”—Shubhangi Swarup, author of Latitudes of Longing