Can Fish Count?: What Animals Reveal About Our Uniquely Mathematical Minds (Hardcover) 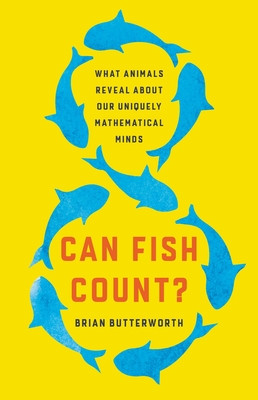 Can Fish Count?: What Animals Reveal About Our Uniquely Mathematical Minds (Hardcover)

The philosopher Bertrand Russell once observed that realizing that a pair of apples and the passage of two days could somehow both be represented by the concept we call “two” was one of the most astonishing discoveries anyone had ever made. So what do we make of the incredible fact that animals seem to have inherent mathematical abilities? As cognitive psychologist Brian Butterworth shows us in Can Fish Count?, many “simple” animals—such as bees, which count trees and fence posts, and guppies, which can size up groups—have a sense of numbers. And unlike humans, they don’t need to be taught.

In telling animals’ stories, Butterworth shines new light on one of our most ancient questions: Just where, exactly, do numbers come from? He reveals how insights gleaned from studying animals can help us make better sense of our own abilities. Full of discovery and delight, Can Fish Count? is an astonishing journey through the animal kingdom and the human mind.

Brian Butterworth is emeritus professor of cognitive neuropsychology at University College London, working on the genetics and neuroscience of mathematical abilities and disabilities. He is a fellow of the British Academy and the author of What Counts, as well as of several academic books. He lives in London.
“The plentiful real-world examples are always enlightening and entertaining. Math-minded readers will find this a fun ride.”
—Publishers Weekly

“Since we humans developed mathematics to optimize our lives, it’s not much of a stretch to assume that other living creatures must have developed their own kinds of mathematics — but how could we find out?  Butterworth’s descriptions of the ingenious methods scientists have come up with to uncover the hidden mathematical world of our fellow creatures will amaze you.”
—Keith Devlin, Ph.D., mathematician and author of The Math Instinct

“What I like best about this fascinating book is the detail. Brian Butterworth doesn't just tell us stories of animals with numerical abilities: he tells us about the underlying science. Elegantly written and a joy to read.”—Professor Ian Stewart, FRS, author of What's the Use?

“Can Fish Count? explores the intriguing ways of counting around the world, from Neanderthals and ancient human civilizations to animals as diverse as primates, insects, and – you guessed it – fish. Brian Butterworth’s fascinating research demonstrates that counting is everywhere and has accompanied us since our Cambrian ancestors.”
—Lars Chittka, Professor of Sensory and Behavioural Ecology, Queen Mary University of London