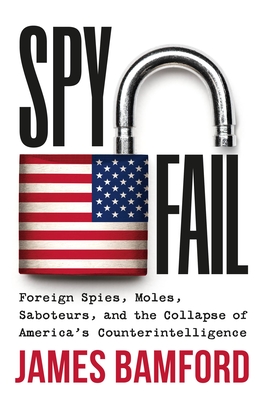 
On Our Shelves Now at:
James Bamford, the bestselling author of The Puzzle Palace and Body of Secrets, unveils a hidden cabal of foreign powers that have spied against America to reveal the incredible spygames, secrets, and cyberweapons they’ve hatched, unlocked, and stolen--and how U.S. intelligence has utterly failed to stop them.

SPYFAIL is about the highly dangerous and growing capability of foreign countries to conduct large-scale espionage within the United States and how the FBI and other agencies have failed to prevent it. These covert operations involve a variety of foreign countries—North Korea, Russia, Israel, China, and others—and include cyberattacks, espionage, psychological warfare, the infiltration of presidential campaigns, the smuggling of nuclear weapons components, and other incredibly nefarious actions.

With his trademark deep investigative style, James Bamford digs as deep as one can go into these clandestine invasions and attacks, uncovering who’s involved, how these spygames were carried out, and why none of this was stopped. Full of revelations, SPYFAIL includes access to previously secret and withheld documents, such as never-before-seen parts of the Mueller Report, and interviews with confidential sources.

Throughout this stunning, eye-opening account, SPYFAIL demonstrates again and again how large a role politics, special interests, and corruption play in allowing these shocking foreign intrusions to continue—leaving America and its secrets vulnerable and undefended.
James Bamford is a bestselling author, Emmy-nominated filmmaker for PBS, award-winning investigative producer for ABC News, and winner of the National Magazine Award for Reporting for his writing in Rolling Stone on the war in Iraq. He has also circumnavigated the surface of the earth, crossing every meridian of longitude by land and sea, and was elected to membership in the Explorers Club.

“Long before most Americans ever had to think about warrantless eavesdropping, the journalist James Bamford published The Puzzle Palace, the first book to be written about the National Security Agency . . . He concluded with an ominous warning: ‘Like an ever-widening sinkhole, N.S.A.’s surveillance technology will continue to expand, quietly pulling in more and more communications and gradually eliminating more and more privacy.’ Three decades later, this pronouncement feels uncomfortably prescient: We were warned.”—Alexander Nazaryan, The New Yorker

“James Bamford . . . rips away the secrecy with [The Puzzle Palace]. There have been glimpses inside the N.S.A. before, but until now no one has published a comprehensive and detailed report on the agency. The quality and depth of Mr. Bamford's research are remarkable . . . Mr. Bamford has emerged with everything except the combination to the director's safe. In some sections it appears that he may even have that . . .  By revealing the scope and opening up the operations of the N.S.A. without giving away its most sensitive secrets, Mr. Bamford has performed an important public service with this impressive book.”—Philip Taubman, New York Times Book Review

"James Bamford's landmark account The Puzzle Palace . . . by far the most comprehensive and authoritative account of the [N.S.A.], quickly became a classic . . . Now Bamford, an investigative journalist . . . brings us Body of Secrets, an examination of the National Security Agency from its founding to the present. And he has done it again. Far more than an update of his first book, Body of Secrets is every bit as impressive an achievement. Not only is this the definitive book on America's most secret agency, but it is also an extraordinary work of investigative journalism, a galvanizing narrative brimming with heretofore undisclosed details."—Joseph Finder, New York Times Book Review

“For thirty years, on a sometimes lonely hunt, James Bamford has pursued that great white whale of American intelligence, the National Security Agency. It has been a jarring ride at times. He was threatened with prosecution in 1982 for revealing the secrets of that mammoth eavesdropping agency in his pathbreaking first book, The Puzzle Palace . . . Now he has followed up with [TheShadow Factory,] a third book reconstructing the agency’s recent history . . . Mr. Bamford traces what was happening inside the agency as the 9/11 hijackers arrived in the United States and made preparations for the attack. Some were living in Laurel, Maryland, home to thousands of agency employees. ‘The terrorists and the eavesdroppers would coexist in the N.S.A.’s close-knit community like unseeing ghosts,’ Mr. Bamford writes.”—Scott Shane, New York Times

“A Pretext for War is probably the best one-volume companion to the harrowing events in the war on terrorism since 1996, chiefly because it focuses on the most difficult-to-pierce subject: the hidden machinery of U.S. intelligence. Bamford is a veteran chronicler of the spy world whose  Puzzle Palace, published in 1982, is still considered the classic account of the mysterious National Security Agency . . . His account of 9/11 and its aftermath is studded with new details.”—Michael Duffy, TIME