Action: The Art of Excitement for Screen, Page, and Game (Hardcover) 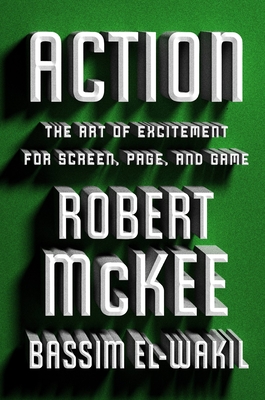 Action: The Art of Excitement for Screen, Page, and Game (Hardcover)

From the master of Story, Dialogue, and Character, ACTION offers writers the keys to propulsive storytelling.

ACTION explores the ways that a modern-day writer can successfully tell an action story that not only stands apart, but wins the war on clichés. Teaming up with the former co-host of The Story Toolkit, Bassim El-Wakil, legendary story lecturer Robert McKee guides writers to award-winning originality by deconstructing the action genre, illuminating the challenges, and, more importantly, demonstrating how to master the demands of plot with surprising beats of innovation and ingenuity.

A must-add to the McKee storytelling library, ACTION illustrates the principles of narrative drive with precision and clarity by referencing the most popular action movies of our time including: Die Hard, The Star Wars Saga, Dark Knight, The Matrix, and Avengers: Endgame.

Robert McKee, a Fulbright scholar and member of Final Draft’s Hollywood Hall of Fame, is the world's most sought-after author and lecturer known for his seminars/webinars that provides writers with crucial insight on the story universe. His writing seminars have earned him an international reputation. The cornerstones of his teaching are Character, Storynomics, and Dialogue. Translated into 23 languages, these singular works have defined how we talk about the art of storytelling. Over the last 35 years, he has mentored screenwriters, novelists, playwrights, poets, documentary makers, producers, and directors. The list of McKee alumni includes the winners of over 60 Academy Awards, 200 Emmy Awards, and 100 Writers Guild of America Awards, as well as recipients of the Pulitzer, Booker, Olivier, and other major prose and playwriting prizes.

Bassim El-Wakil has worked closely with Robert McKee for over a decade, as author and lecturer. Acknowledged as an expert on all forms of story structure and genre, he has a personal love for Action, Crime, Fantasy, and the long-form serials of television and comic books. His podcasts, THE STORY TOOLKIT and THE WRITER'S JIHAD are available on all major podcast platforms.

"ACTION inspires action. McKee and El-Wakil have created the guide I’ve been looking for all my years as a professional screenwriter. ACTION helps you understand how and why the thing works—how its heart beats, how it thinks, and most importantly, what makes it move. For a professional action writer, it almost feels like cheating."—Zak Penn, American screenwriter and director

"Robert McKee’s books offer lucid analysis, perceptive insights and fruitful challenges to those of us who practice the magical arts of storytelling. I highly recommend his latest: ACTION—THE ART OF EXCITEMENT Buy it, read it, put it to work!"—Michael Hirst, creator, screenwriter, series producer of Vikings, and Billy the Kid

"McKee is the world's best-known and most respected lecturer of Storytelling Arts."—The Wall Street Journal

"His great insight into storytelling is unparalleled."—Los Angeles Times

"A not-so-secret force in the movie industry and Hollywood's most sought-after screenwriting instructor." —Vanity Fair