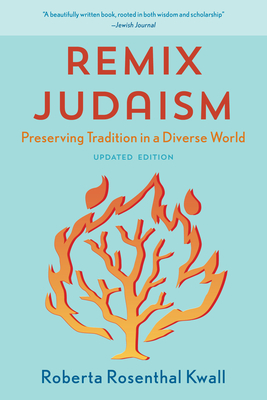 
Not On Our Shelves—Ships in 1-5 Days
One of the most talked about books in the Jewish community when it originally appeared, Remix Judaism: Preserving Tradition in a Diverse World offers an eloquent and thoughtful new vision for all Jews seeking a sense of belonging in a changing world, regardless of their current level of observance. Roberta Kwall sets out a process of selection, rejection, and modification of rituals that allow for a focus on Jewish tradition rather than on the technicalities of Jewish law. Her goal is not to sell her own religious practices to readers but, rather, to encourage them to find their own personal meaning in Judaism outside the dictates of Commandment, by broadening their understanding of how law, culture, and tradition fit together. She inspires readers to be intentional and mindful about the space they allocate for these elements in defining their individual Jewish journeys and identities. The paperback edition includes a new preface addressing recently released findings, including the Pew Report on the American Jewish Community, exploring the challenges of practicing Judaism today.
Roberta Rosenthal Kwall is the Raymond P. Niro Professor at DePaul University College of Law. She earned her JD from the University of Pennsylvania, an MA in Jewish Studies and a BA in American Studies and Religion. Kwall is the author of The Myth of the Cultural Jew: Culture and Law in Jewish Tradition (OUP, 2015) and The Soul of Creativity (Stanford UP, 2010). Her OpEds and articles on topics of relevance to the Jewish community have appeared in The Chicago Tribune, JTA, Commentary, The Forward, The Jewish Journal, The Jewish Week and Jewish Philanthropy.