Whispers of the Gods: Tales from Baseball's Golden Age, Told by the Men Who Played It (Hardcover) 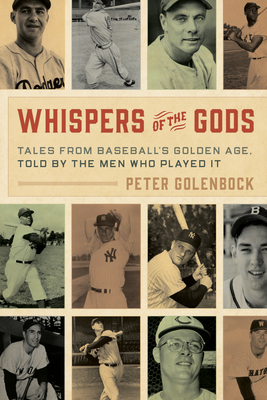 Whispers of the Gods: Tales from Baseball's Golden Age, Told by the Men Who Played It (Hardcover)


In Stock—Click for Locations
Anyone who has love for the game of baseball will enjoy this remarkable book. Library Journal, Starred Review In Whispers of the Gods, bestselling author Peter Golenbock brings to life baseball greats from the 1940s, 1950s, and 1960s through timeless stories told straight from the players themselves. Like the enduring classic The Glory of Their Times, this book features the reminiscences of baseball legends, pulled from hundreds of hours of taped interviews with the author. Roy Campanella talks about life in the Negro Leagues before coming up to the Brooklyn Dodgers. Ted Williams recounts why he believes Shoeless Joe Jackson belongs in the Hall of Fame. Tom Sturdivant provides vivid memories of Casey Stengel, Mickey Mantle, and other Yankee icons. Other voices include Phil Rizzuto, Jim Bouton, Monte Irvin, Stan Musial, Ron Santo, Rex Barney, Ellis Clary, Roger Maris, Ed Froelich, Marty Marion, Jim Brosnan, Gene Conley, and Kirby Higbe. The players interviewed were All-Stars, Hall of Famers, and heroes to many, and their impact on the national pastime is still seen to this day. Baseball history comes alive through the stories shared in Whispers of the Gods, offering a fascinating account of the golden age of baseball.
Peter Golenbock has written more than sixty books, including ten New York Times best sellers. His best-selling books on baseball include Dynasty: The New York Yankees, 1949-1964;The Bronx Zoo (with Sparky Lyle); Bums: An Oral History of the Brooklyn Dodgers; Balls (with Graig Nettles); Amazin' The Miraculous History of New York's Most Beloved Baseball Team; and Idiot: Beating "The Curse" and Enjoying the Game of Life (with Johnny Damon). He resides in St. Petersburg, FL.