Not All Supermen: Sexism, Toxic Masculinity, and the Complex History of Superheroes (Hardcover) 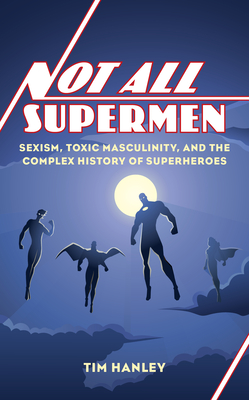 Not All Supermen: Sexism, Toxic Masculinity, and the Complex History of Superheroes (Hardcover)


Not On Our Shelves—Ships in 1-5 Days
(This book cannot be returned.)
An eye-opening exploration of the toxic masculinity and sexism that pervades the superhero genre. Superheroes have been exciting and inspirational cultural icons for decades, dating back to the debut of Superman in the 1930s. The earliest tales have been held up as cornerstones of the genre, looked upon with nostalgic reverence. However, enshrining these tales also enshrines many outdated values that have allowed sexist gender dynamics to thrive. In Not All Supermen: Sexism, Toxic Masculinity, and the Complex History of Superheroes, Tim Hanley examines how anger, aggression, and violence became the norm in superhero comics, paired with a disdain for women that the industry has yet to fully move beyond. The sporadic addition of new female heroes over the years proved largely ineffective, the characters often underused and objectified. Hanley also reveals how the genre's sexism has had real-world implications, with many creators being outed as sexual harassers and bigots, while intolerant fan movements are awash with misogynistic hate speech. Superheroes can be a force for good, representing truth, justice, and courage, but the industry is laden with excessive baggage. The future of the genre depends on what elements of its past are celebrated and what is left behind. Not All Supermen unravels this complex history and shows how superheroes can become more relevant and inspiring for everyone.
Tim Hanley is a comic book historian and author whose work focuses on the American comic book industry. His books include Wonder Woman Unbound, Investigating Lois Lane, The Many Lives of Catwoman, and Betty and Veronica: The Leading Ladies of Riverdale (Rowman & Littlefield). He has also written for The Atlantic, Polygon, and The Comics Journal. Tim lives in Halifax, Nova Scotia, between his massive stacks of comic books.