Finding Love After Loss: A Relationship Roadmap for Widows (Hardcover) 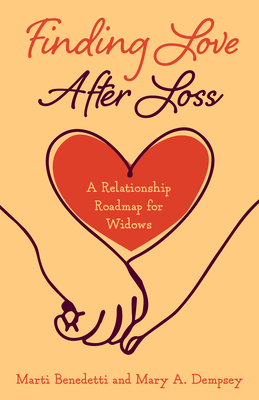 Finding Love After Loss: A Relationship Roadmap for Widows (Hardcover)

By Marti Benedetti, Mary A. Dempsey


On Our Shelves Now at:
(This book cannot be returned.)
Guides readers through the emotions and practical concerns of finding love after the death of a partner. Romantic love, in all its permutations, forms one of the most fascinating of human interactions. It also can be one of life's thorniest challenges, especially in a world where relationships often unfold online and, recently, where a pandemic barred face-to-face contact with people outside one's immediate household. Among those seeking romance in increasing numbers is a group that stands apart: the women who, slammed by the death of a spouse, bravely pursue new love. Finding Love After Loss: A Relationship Roadmap for Widows goes to the trenches to interview widows who have embarked, nervously but with hope, on this quest. Their frank and revealing interviews, along with wisdom from relationship experts, provide guidance to other women trying to navigate the relationship scene when their last date might have been decades ago. Where do widows find new partners? How much should they share in their online profile? What do they tell their friends and family? What about getting naked for the first time with a new man? Who pays when the bill appears at a restaurant? More than any time in U.S. history, the country's widows are seeking another chance at romance. The sheer number of widows--11 million, with an average age in the fifties--makes them a formidable force. They are living longer and have broader views on sex and money. Yet it is difficult for them to find their footing. Many of them have been away from the courtship arena for decades. They may make their return to dating with children and in-laws in tow. They are confused by the new rules and unclear on the expectations but convinced that they are capable of loving again. This book, written by a widow and a co-author who dated a widower, details just how powerful, sometimes daunting, and exhilarating the journey to new love can be. It also unveils the extraordinary ways that widows are reshaping the romance landscape: by tossing traditional marriage vows by the roadside, by skipping marriage entirely, or even by committing to a new partner but living apart. This isn't your grandmother's widowhood scene, not by a long shot. Finding Love After Loss examines the crazy, sad, and even zany contributions that people left behind by the death of a partner bring to new relationships. At the same time, it reveals both the amazing resilience of women who have lived through great loss and the irresistible pull of human connection.
Marti Benedetti, a widow, lived most of her life in the Detroit area. Following a career as a newspaper reporter, she became a self-employed journalist and researcher. In 2021, after completing the book manuscript but before its publication, Marti died of metastatic breast cancer. Mary A. Dempsey, in a longtime relationship with a widower, spent many years working for newspapers and magazines in the United States and Latin America. She now writes and edits for universities, nonprofits, and global think tanks. She is based in Washington, D.C.