Disinformation: The Nature of Facts and Lies in the Post-Truth Era (Hardcover) 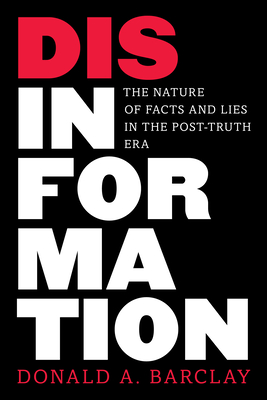 Disinformation: The Nature of Facts and Lies in the Post-Truth Era (Hardcover)

By Donald A. Barclay


Not On Our Shelves—Ships in 1-5 Days
Does the idea of a world in which facts mean nothing cause anxiety? Fear? Maybe even paranoia? Disinformation: The Nature of Facts and Lies in the Post-Truth Era cannot cure all the ills of a post-truth world, but by demonstrating how the emergence of digital technology into everyday life has knitted together a number of seemingly loosely related forces-historical, psychological, economic, and culture-to create the post-truth culture, Disinformation will help you better understand how we got to where we now are, see how we can move beyond a culture in which facts are too easily dismissed, and develop a few highly practical skills for separating truth from lies. Disinformation explains: -How human psychology-the very way our brains work-can leave us vulnerable to disinformation. -How the early visions of what a global computer network would and should be unintentionally laid the groundwork for the current post-truth culture. -The ways in which truth is twisted and misrepresented via propaganda and conspiracy theories. -How new technology not only spreads disinformation but may also be changing the way we think. -The ways in which the economics of information and the powerful influence of popular culture have contributed to the creation of the post-truth culture. Unlike the far-too-numerous one-sided, politically ideological treatments of the post-truth culture, Disinformation does not seek to point the finger of blame at any individuals or groups; instead, its focus is on how a number of disparate forces have influenced human behaviors during a time when all of humanity is struggling to better understand and more effectively control (for better or worse) challenging new technologies that are straining the limits of human intellectual and emotional capacity.
Donald Barclay is the Deputy University Librarian at the University of California, Merced. He has authored numerous articles and books over the course of his career on topics ranging from the literature of the American West, to children's literature, to library and information science. His most recent book, Fake News, Propaganda, and Plain Old Lies: How to Find Trustworthy Information in the Digital Age, was published by Rowman & Littlefield in 2018. He currently live in Merced, California.