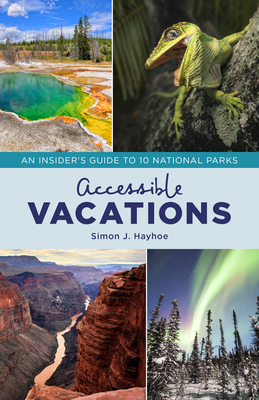 
Not On Our Shelves—Ships in 1-5 Days
Take a tour of ten national parks in this overview of the ways in which they can be accessed by those with physical, sensory and learning limitations and their companions. The National Parks of the U.S. are some of the most sought-after travel destinations in the world. But a visit to any one of them may seem daunting to someone with hearing, seeing, or other physical challenges. What many may not know is that the National Parks offer help to those with access needs. Here, Simon Hayhoe takes readers on a tour of ten National Parks and the accessibility options available to visitors and their companions. He covers three regions of national parks in the east, center and west of the US. The eastern parks include Acadia National Park in Maine, the Everglades National Park in Florida and the Gettysburg National Military Park in Pennsylvania. The central parks include Grand Canyon National Park in Arizona, Rocky Mountain National Park in Colorado, Yellowstone National Park, which is mostly in Wyoming and Zion National Park in Utah. The western parks include Denali National Park in Alaska, Olympic National Park in Washington State and Yosemite National Park in California. Knowing how and where to tap into access points is the first step on your journey. So come along, and let this work guide you.
Simon Hayhoe is the author of eight books on art education and museum access for people with disabilities and is also an educational advisor for the World Health Organization. His current work focuses on inclusive mobile technologies, and he has just completed a European project investigating the use of mobile technologies by disabled people in museums and monuments. Hayhoe has also won numerous awards in his field, including a Fulbright Award and a Fellowship of the Metropolitan Museum of Art, and he has presented his work at major museums and colleges in the US, Russia, UK, Singapore, Belgium and Italy. Beyond work and writing, Hayhoe lives with his wife and two children, close to where he was born and raised.