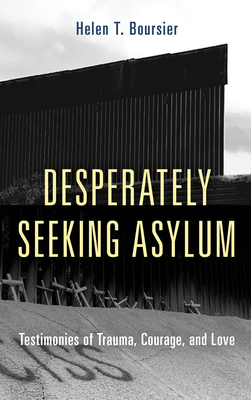 
Not On Our Shelves—Ships in 1-5 Days
Told through heart-wrenching testimonies, photographs, and artwork of refugees fleeing their homelands, Desperately Seeking Asylum describes firsthand accounts of the harrowing and dangerous journey immigrants are willing to endure knowing that they might not even make it onto US soil. Desperately Seeking Asylum prioritizes the testimonies of refugee families and unaccompanied children who are seeking asylum in the United States from Central America, primarily Guatemala, El Salvador, and Honduras. Their desperate and heart-wrenching stories disclose why they fled their homelands, their experiences along the treacherous overland journey, and the harsh reality of how the United States treats these families and children upon arrival to the United States. It critiques US complicity to the violence they are fleeing and discloses how national leadership shapes US immigration policies and practices, including the blatant documented violations against asylum seekers at the US-Mexico border. Most notably, it offers transparency on US immigration practices at the US-Mexico border which violate existing US and international laws that are intended to protect asylum seekers, including the current official practice of blocking bridges with "turnbacks" to prevent "inadmissibles" from applying for asylum in the United States. It explains protections mandated by US law for unaccompanied children who are in US custody, and discloses violations which keep these children detained excessive lengths of time in substandard for-profit facilities which are overseen by the government and funded by taxpayers. Boursier also deconstructs the complicated asylum process, including examining the credible fear for asylum procedure, showing how technical terms and language are used to justify injustice at the border. Desperately Seeking Asylum offers hope for a new vision with alternative options and practical actions which assist migrants through humanitarian aid on both sides of the border. The witness for compassionate and responsible response by people of conscious becomes an antidote to injustice against asylum seekers. Instead of the current administration manipulating US laws to support its ulterior motives and political agenda, Boursier asks readers to hold US elected officials accountable to the same "Rule of Law" that the United States demands of refugees. Ultimately, Boursier suggests a spectrum of options for practical ways to make the political personal through public witness and civic engagement to transform the broken immigration process for refugees who are desperately seeking asylum.
Rev. Dr. Helen T. Boursier is a public theologian, educator, author, activist, ordained minister, and artist. "Pastora Helena" has been a volunteer chaplain with refugee families both inside and outside family detention since 2014. She authored The Ethics of Hospitality: An Interfaith Response to U.S. Immigration Policies.