Jihadism Constrained: The Limits of Transnational Jihadism and What It Means for Counterterrorism (Hardcover) 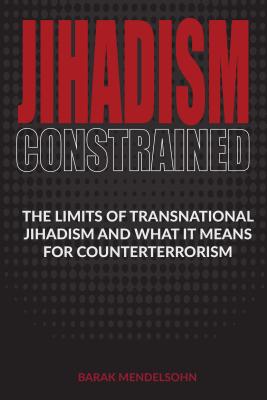 Jihadism Constrained: The Limits of Transnational Jihadism and What It Means for Counterterrorism (Hardcover)


Not On Our Shelves—Ships in 1-5 Days
How threatening are al-Qaeda and the Islamic State? In Jihadism Constrained, Barak Mendelsohn suggests that although jihadi terrorism is a serious challenge, it must not be exaggerated. Transnational terrorist organizations and jihadi transnational groups in particular face three central challenges: How to create a polity that is based on religious affiliation when most people identify with national and sub-national identities? How to generate political effects across borders? And how to produce unity among all components of the transnational movement? The book argues that transnational jihadism has been struggling on all three fronts. Success of armed nonstate actors hinges on their ability to mobilize the masses, but transnational jihadis persuaded only a tiny fraction of the world's Muslims to abandon their other identity markers and support a faith-based global polity that promotes an extreme interpretation of Islam. As military pressure endangers cross-border activities, jihadi groups introduced local branches only to find that such localization undermines their transnational agenda. Jihadi groups also lack a viable plan to turn armed success in separate states into cross-border political effects. Finally, jihadis regularly fall into internal conflicts. These conflicts are exacerbated by the use of Islamic discourse that renders compromise and reconciliation particularly difficult.
Barak Mendelsohn is an Associate Professor of Political Science at Haverford College and a Senior Fellow at the Philadelphia-based Foreign Policy Research Institute (FPRI). He holds a doctoral degree in Government from Cornell University, MA in Security Studies from Tel Aviv University, and BA in Middle East Studies from the Hebrew University, Jerusalem. He specializes in radical Islamist organizations, with an emphasis on al-Qaeda and the Islamic State. His research interests also cover Middle East security, terrorism and counter-terrorism, U.S. foreign policy, and questions of international order. Mendelsohn is the author of The al-Qaeda Franchise: The Expansion of al-Qaeda and Its Consequences (2016) and of Combating Jihadism: American Hegemony and Interstate Cooperation in the War on Terrorism (2009). In addition, Mendelsohn has published numerous articles in a variety of academic and policy journals, as well as in prominent media outlets.