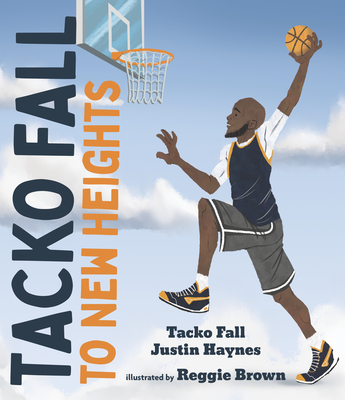 
On Our Shelves Now at:
The inspiring true story of basketball phenom Tacko Fall—and his journey from West Africa to the NBA—will inspire young people to dream and do.


Tacko Fall was always tall, even as a child, but he wasn’t always a slam-dunk star. On his first official day of training as a boy in Senegal, running up and down the basketball court was exhausting. The first time he tried weight-lifting, he could barely lift the bar, even with no weights on it! The game had many rules that he didn’t understand, but Tacko set aside frustration and found the courage to keep working. The more he practiced, the more his skills grew, and the more reachable his goals became. Touching on immigration, determination, hard work, and the long road to success, this picture-book biography of one rising basketball star will delight his many fans and introduce him to new ones. Coauthored with his sports agent and paired with engaging illustrations, Tacko Fall’s relatable story will motivate readers to overcome obstacles and aim high—and higher still.
Tacko Fall emigrated from Senegal as a teenager to play basketball and rose to prominence when he was selected by the Boston Celtics and became a seven-foot-six ball-playing sensation. He has played for the Boston Celtics and the Cleveland Cavaliers and lives in Cleveland, Ohio.

Justin Haynes is a sports agent at BDA Sports Management, where he represents Tacko Fall and other players. He lives in New Jersey.

Reggie Brown is the illustrator of several books for children, including the Magnificent Makers series by Theanne Griffith and Baseball Baby and Soccer Baby by Laura Gehl. He lives in San Diego.
Relatable and engaging. . . the honesty with which Fall expresses the emotional points of his journey is refreshing and touching. Brown’s illustrations represent Fall’s comparative height without caricature, and the variety of scenes and vignettes with animation-style pictures gives the feeling of a humorous graphic novel, in the best way. . . .Triumphant and inspiring, this autobiographical piece will thrill fans and charm all readers.
—Kirkus Reviews

Throughout, the creators emphasize the value of practice, hard work, and persistence. . . Brown’s geometric digital visuals feature Fall achieving “new heights” and offer a big payoff as they picture the figure dunking during his first professional game—a winning conclusion to a notable life story that foregrounds dreaming big and having courage.
—Publishers Weekly

The former UCF standout has penned a children’s book to inspire others who may feel the path toward their dreams is just too hard to travel.
—Celtics Wire