Not That Pet! (Hardcover) 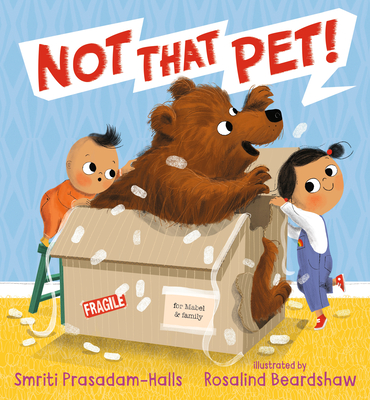 Not That Pet! (Hardcover)

Not noisy or scary or covered in spikes.
She’d choose something friendly that EVERYONE likes.

Mabel’s family is letting her pick what kind of pet to get, and she is determined to find the very BEST one. “Any pet you like delivered to your door,” promises the sign. But what if the ants are too tiny, the hyenas too giggly, the owl too loud? What if the snake almost strangles Granddad and the skunk wants to spray the baby? None of the pets she tries out seems like the right fit. Readers will love following through several comical reveals until Mabel meets her furry match (not what you might guess!). Best-selling author Smriti Prasadam-Halls’s hilarious rhyming read-aloud and Rosalind Beardshaw’s charming illustrations will have kids laughing—and dreaming of their own quirky pets.
Smriti Prasadam-Halls is an award-winning, internationally best-selling children’s author whose books include Rain Before Rainbows, illustrated by David Litchfield, and Welcome to Your World, illustrated by Jaime Kim. Her books have been published in more than thirty languages. Previously, Smriti Prasadam-Halls worked at the BBC and in children’s publishing and television as a writer and editor. She lives in London with her husband and their three sons.

Rosalind Beardshaw has illustrated several picture books for children, including the Walk and See series and I See the Moon: Rhymes for Bedtime. She lives in York, England, with her partner, young son, and baby daughter.
With its bouncy, rhyming text and cheeky humor, this playful ode to animal companions would make for a delightful read-aloud. . . . An amusing take on a near-universal childhood milestone that successfully expands upon a familiar theme.
—Kirkus Reviews