Underground Fire: Hope, Sacrifice, and Courage in the Cherry Mine Disaster (Hardcover) 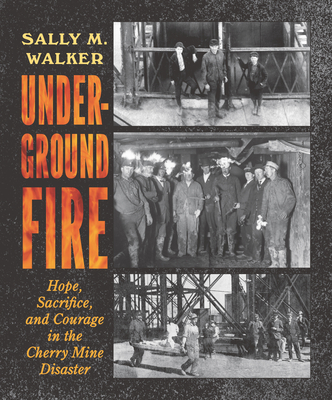 Underground Fire: Hope, Sacrifice, and Courage in the Cherry Mine Disaster (Hardcover)


Coming Soon—Pre-Order Now
A historic mine fire traps hundreds of men underground in a gripping work of narrative nonfiction meticulously researched and told by a master of the genre.

It is November 13, 1909, and the coal miners of Cherry, Illinois, head to work with lunch pails in hand, just like any other day. By seven a.m., 484 of these men are underground, starting jobs that range from taking care of the mules that haul coal to operating cages that raise and lower workers and coal to chiseling out rocks and coal from the tunnels of the mine. With the electrical system broken, they’re guided by kerosene torches—and come early afternoon, a slow-moving disaster begins, barely catching the men’s attention until it’s too late. In what starts as an hour-by-hour account, Sally Walker tells the riveting and horrifying story of the Cherry Mine fire, which trapped hundreds of men underground. Alternating between rescue efforts above and the heroic measures of those trying to survive the poor air and entrapment below, the tragic story unfolds over eight excruciating days in a narrative compelled by the miners’ hope and absolute will to survive. Rich with archival photographs and documents, this stirring account includes sources, bibliography, an author’s note, and follow-up information about survivors, rescuers, and families.
Sally M. Walker’s degree in geology and interest in history led her to the story of the Cherry Mine disaster. She is the award-winning author of more than fifty books for children, including Boundaries: How the Mason-Dixon Line Settled a Family Feud and Divided a Nation; The Sinking of the Sultana: A Civil War Story of Imprisonment, Greed, and a Doomed Journey Home; and Champion: The Comeback Tale of the American Chestnut Tree, an Orbis Pictus Honor Book. Sally Walker lives in Illinois.
A poignant account of the 1909 Cherry, Illinois, coal mine disaster, one of the worst in U.S. history.
—Kirkus Reviews

While Walker draws attention to the corporate greed that led to unfair working conditions, including child labor, readers may also recognize some contemporary parallels to this story.
—The Horn Book