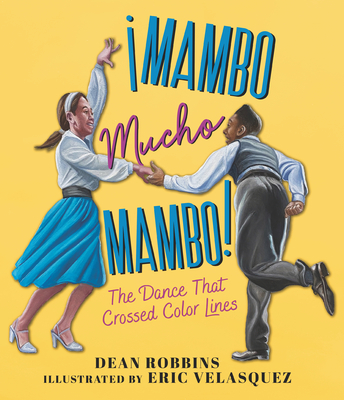 
On Our Shelves Now at:
New York City’s desegregated Palladium Ballroom springs to life with a diverse 1940s cast in this jazzy picture-book tribute to the history of mambo and Latin jazz.

Millie danced to jazz in her Italian neighborhood. Pedro danced to Latin songs in his Puerto Rican neighborhood. It was the 1940s in New York City, and they were forbidden to dance together . . . until first a band and then a ballroom broke the rules. Machito and His Afro-Cubans hit the scene with a brand-new sound, blending jazz trumpets and saxophones with Latin maracas and congas creating Latin jazz, music for the head, the heart, and the hips. Then the Palladium Ballroom issued a bold challenge to segregation and threw open its doors to all. Illustrated with verve and told through real-life characters who feature in an afterword, ¡Mambo Mucho Mambo! portrays the power of music and dance to transcend racial, religious, and ethnic boundaries.
Dean Robbins is the author of Margaret and the Moon: How Margaret Hamilton Saved the First Lunar Landing; Miss Paul and the President: The Creative Campaign for Women's Right to Vote; and Two Friends: Susan B. Anthony and Frederick Douglass, and a lifelong student of jazz. Dean Robbins lives in Madison, Wisconsin.

Eric Velasquez is the award-winning illustrator of Schomburg: The Man Who Built a Library, which received a Walter Dean Myers Award and an SCBWI Golden Kite Award. He has also won a John Steptoe New Talent Illustrator Award and a Pura Belpré Illustrator Award. Eric Velasquez lives in Hartsdale, New York.
Robbins’s snappy language and smoking turn of phrase brings the mambo and all its followers to life. Lázaro’s Spanish translation sizzles. . . . Velasquez’s illustrations send sparks flying off each full-bleed spread. . . . Fiery and rhythmic storytelling surges to the beat of the conga—a ­must-have selection for all ages.
—School Library Journal (starred review)

Robbins’s prose is as musical as his subject. . . Velasquez’s characteristic, near-photorealistic illustrations, rendered in oil paint in a palette reflecting the time, add a dynamic fluidity to the historical atmosphere of this enlightening narrative nonfiction title.
—Publishers Weekly

Dynamic text goes hand in hand with vibrant, motion-filled illustrations to tell the story of the Latin sound that swept through New York and then the country in the 1940s and ’50s. . . . Exuberant, just like the dance.
—Kirkus Reviews

In Robbins and Velasquez’s hands, this early challenge to segregation makes for a lively, compelling piece of history.
—The Horn Book