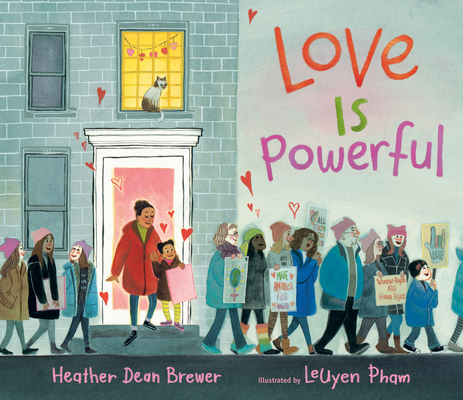 By Heather Dean Brewer, LeUyen Pham (Illustrator)
List Price: $17.99
Our Price: $16.99
(Save: $1.00 6%)
On Our Shelves Now at:
A little girl carries a big message—and finds it thrillingly amplified by the rallying crowd around her—in an empowering story for the youngest of activists.

Mari raised her sign for everyone to see.
Even though she was small and the crowd was very big,
and she didn’t think anyone would hear,
she yelled out.

Mari is getting ready to make a sign with crayon as the streets below her fill up with people. “What are we making, Mama?” she asks. “A message for the world,” Mama says. “How will the whole world hear?” Mari wonders. “They’ll hear,” says Mama, “because love is powerful.” Inspired by a girl who participated in the January 2017 Women’s March in New York City, Heather Dean Brewer’s simple and uplifting story, delightfully illustrated by LeUyen Pham, is a reminder of what young people can do to promote change and equality at a time when our country is divided by politics, race, gender, and religion.
Heather Dean Brewer is a writer, artist, and art director who designs books for kids and adults and loves to ride her bike in the woods. About this book she says, "I've often felt quiet and small and that no one could hear me. But when I joined others in the Women's March and saw my friend Mari lifted above the crowd and heard her voice echo down the streets of New York City, I learned that even the smallest voice has the power to change the world. She lives in Michigan with her family.

LeUyen Pham is the illustrator of the Princess in Black series by Shannon and Dean Hale as well as many other books for children, including Aunt Mary’s Rose by Douglas Wood and God’s Dream by Archbishop Desmond Tutu and Douglas Carlton Abrams. LeUyen Pham lives in California.
This feel-good tale can serve as an accessible starting place or to augment such books as Shane Evans’ We March (2012) and other stories that delve deeper into the reasons why people march and protest...note from and photograph of the real Mari at book’s end charmingly grounds it. Lots of heart.
—Kirkus Reviews

It’s time to unpack activism for the picture book crowd, and this story conveys both the optimistic energy of peaceful mass protests and the exhilaration of what it’s like to demonstrate with large crowds.
—School Library Journal Online

Inspired by a young friend of the author’s who participated in the January 2017 New York City Women’s March, Brewer presents an endearing portrait of a Black mother and daughter who take part in a citywide protest...this personal tale conveys the importance of showing up and the power of collaborative action. A note from the real-life Mari brings the book to a sincere conclusion.
—Publishers Weekly