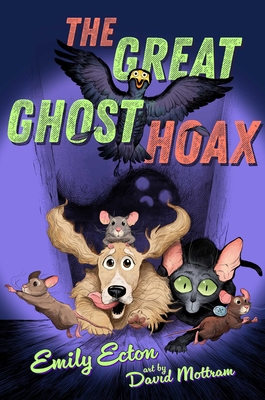 By Emily Ecton, David Mottram (Illustrator)
List Price: $18.99
Our Price: $17.99
(Save: $1.00 5%)
On Our Shelves Now at:
The Secret Life of Pets meets Scooby Doo as furry friends hunt down a ghost in this hilarious sequel to The Great Pet Heist that is “silly business galore” (Kirkus Reviews)!

Butterbean is bored. She and the other pets pulled off a heist once, but that was like a million years ago. Nothing exciting has happened since then. That is, until Mrs. Third Floor shows up at their apartment, convinced there’s a ghost in the building.

Mrs. Third Floor’s rental unit is showing signs of paranormal activity—eerie noises, objects moving when no one is there, fish disappearing from the tank overnight. The pets decide to investigate. Soon they’re confronted with a bigger problem than just ghosts: professional ghost hunters who are offering to drive out the spirits for a hefty fee. It’s up to Butterbean and the rest of the gang to save Mrs. Third Floor from losing her life savings to scammers, all while dealing with some really annoying new animals. Can the furry friends uncover the truth in time?
Emily Ecton is the author of The Great Pet Heist series as well as a number of middle grade books published under the names Emily Ecton and Emily Fairlie. She is also a former writer and producer for Wait, Wait…Don’t Tell Me!, the Peabody Award­–winning comedy news quiz on NPR. She lives in Virginia, with Howdy, a dog whose only admitted vandalism involves her collection of plush squeaky toys. Visit her at EmilyEcton.com.

Dave Mottram is an illustrator living in Ohio who worked as a graphic designer for many years, which led him to pursue his passion for illustration. He paints traditionally and digitally with color and layers and line. He loves tacos, animals, tikis, and nerding out over art supplies. Visit him at DaveMottram.com.
"Silly business galore, with more than a few sly tentacular twists."
— Kirkus Reviews