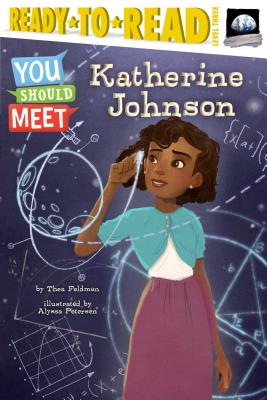 
On Our Shelves Now at:
Get to know the woman who made many of NASA’s early missions possible in this fascinating, nonfiction Level 3 Ready-to-Read, part of a series of biographies about people “you should meet!”

Meet Katherine Johnson, a brilliant mathematician who worked at NASA in the early 1950s until retiring in 1986. Katherine’s unparalleled calculations (done by hand) helped plan the trajectories for NASA’s Mercury and Apollo missions (including the Apollo 11 moon landing). She is said to be one of the greatest American minds of all time.

A special section at the back of the book includes extras on subjects like history and math, plus inspiring careers for math lovers. With the You Should Meet series, learning about historical figures has never been so much fun!
Thea Feldman, a children’s book writer and editor, has helped develop early reader series for various major children’s book publishers. She is also a lifelong animal lover and has written numerous children’s books about animals, worked at the Wildlife Conservation Society, and is a writer and editor for the Mayor’s Alliance for NYC’s Animals. She especially enjoys the opportunity to write early readers about animals. Her cat, Rose, loves to sleep on anything Thea has written.

Alyssa Petersen was born and raised in Southern California, spending many happy days at the beach and Disneyland. She always knew that she wanted to be an artist, but it was in her teenage years that she discovered the world of Concept Art and Visual Development, and she knew that was exactly what she wanted to do. Alyssa attended Brigham Young University and received a BFA in Animation, and took a handful of illustration classes. Alyssa currently works as a concept artist for Disney Interactive, where she has worked on Disney Infinity 2.0 & 3.0. Although she and her husband move often, they currently reside in California.