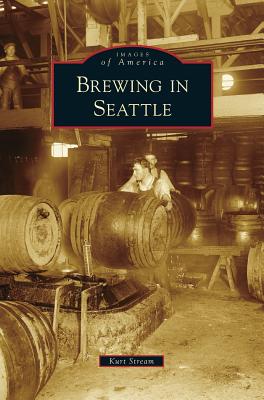 
Not On Our Shelves—Ships in 1-5 Days
(This book cannot be returned.)
Brewing beer in Seattle can be traced back to 1864, when in the small, unincorporated town of under 1,000 people the first brewery opened and began manufacturing porter and cream ales. Over the next 50 years, innovation and entrepreneurship would take Seattle brewed beer to extraordinary heights. By the eve of Prohibition, powered by its popular Rainier Beer, the Seattle Brewing and Malting Company was the largest industrial institution in the state of Washington and the sixth-largest brewery in the world. Prohibition would wipe out the industry in 1916, but by 1933, new faces such as Emil Sick would emerge and bring Seattle back to the forefront of the brewing world. Images of America: Brewing in Seattle is the first book completely dedicated to the rich history of beer in Seattle and showcases just about every single brewery of this great city, from the mid-1800s to the recent craft-brewery boom. It offers a rare glimpse of photographs, advertisements, and interviews from some of the innovators who helped shape Seattle into the beer lover's paradise it is today.