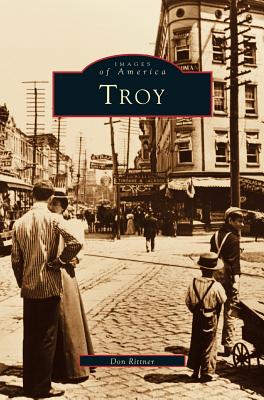 
Not On Our Shelves—Ships in 1-5 Days
(This book cannot be returned.)
Troy, New York has earned some distinctive titles in its more than 200 years of existence. "The Home of Uncle Sam," "The Collar City," and the birthplace of the American Industrial Revolution, Troy has a colorful and engaging history. The city's rich human and industrial legacy is explored in this unprecedented pictorial collection. Troy celebrates the city where 19-year-old Kate Mullaney, an Irish
immigrant, organized 200 women for the first all-female labor union (Collar Laundry Union) more than a century ago. It is where Bessemer Steel was first poured in America, and where the plates for the
iron-clad ship, the Monitor, were manufactured--an event that lead to a turning point for the North during the Civil War. Troy was the home of Samuel Wilson, who packed beef for the U.S. Army during the War of 1812, and where the famous trademark U.S., better known as Uncle Sam, originated. The premier cast-iron stove manufacturing center during the early 19th century, Troy was responsible for heating homes around the world. It earned the reputation of "The Collar City" when, at one time, 15,000 workers produced more than $40 million worth of collars, cuffs, and shirts per year. With more than 200 photographs, most of which come from the rich archives of the Rensselaer County Historical Society, Troy spans much of the 19th and early 20th centuries.