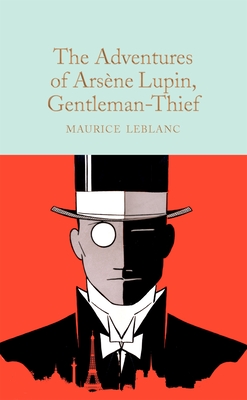 The inspiration for the hit Netflix show, Lupin, Arsène Lupin is charming, clever and bold. A master of disguise, he steals from the rich, he outsmarts the police and he’s generous to those in need. And above all, he never takes himself too seriously. This French Robin Hood has charmed readers for generations and the stories about his dazzling escapades have been adapted countless times for television, stage and film.

Part of the Macmillan Collector’s Library; a series of stunning, clothbound, pocket-sized classics with gold foiled edges and ribbon markers. These beautiful books make perfect gifts or a treat for any book lover. This edition of The Adventures of Arsène Lupin, Gentleman-Thief is translated from the French by Alexander Teixeira de Mattos and features an introduction by Emma Bielecki.

In the opening stories, Lupin is arrested, only to engineer his own incredible escape. What follows are wonderfully entertaining and action packed stories that finish with a brief encounter with none other than Sherlock Holmes. These stories were first published together in 1907 and this edition of the gentleman thief's very first adventures is the perfect place to start exploring his world of daring escapes, cunning disguises and ambitious heists.

Maurice Leblanc was born in 1864 in Rouen. From a young age he dreamt of being a writer and in 1905, his early work caught the attention of Pierre Lafitte, editor of the popular magazine, Je Sais Tout. He commissioned Leblanc to write a detective story so Leblanc wrote ‘The Arrest of Lupin’ which proved hugely popular. His first collection of stories was published in book form in 1907 and he went on to write numerous stories and novels featuring Arsène Lupin. He died in 1941 in Perpignan.