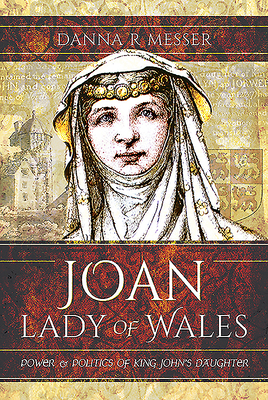 
Special Order—Subject to Availability
This is the first book to ever be written on Joan, Lady of Wales, the first woman to be designated with such a title. Her role a political diplomat in early 13th century Anglo-Welsh relations was instrumental.

The history of women in medieval Wales before the English conquest of 1282 is one largely shrouded in mystery. For the Age of Princes, an era defined by ever-increased threats of foreign hegemony, internal dynastic strife and constant warfare, the comings and goings of women are little noted in sources. This misfortune touches even the most well-known royal woman of the time, Joan of England (d. 1237), the wife of Llywelyn the Great of Gwynedd, illegitimate daughter of King John and half-sister to Henry III. With evidence of her hand in thwarting a full scale English invasion of Wales to a notorious scandal that ended with the public execution of her supposed lover by her husband and her own imprisonment, Joan's is a known, but little-told or understood story defined by family turmoil, divided loyalties and political intrigue.

From the time her hand was promised in marriage as the result of the first Welsh-English alliance in 1201 to the end of her life, Joan's place in the political wranglings between England and the Welsh kingdom of Gwynedd was a fundamental one. As the first woman to be designated Lady of Wales, her role as one a political diplomat in early thirteenth-century Anglo-Welsh relations was instrumental. This first-ever account of Siwan, as she was known to the Welsh, interweaves the details of her life and relationships with a gendered reassessment of Anglo-Welsh politics by highlighting her involvement in affairs, discussing events in which she may well have been involved but have gone unrecorded and her overall deployment of royal female agency.