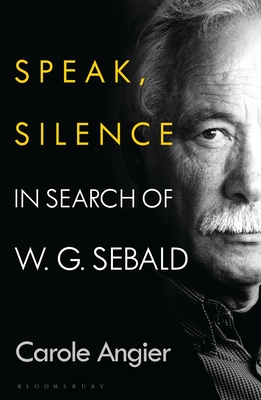 'The best biography I have read in years' Philippe Sands

W. G. Sebald was one of the most extraordinary and influential writers of the twentieth century. Through books including The Emigrants, Austerlitz and The Rings of Saturn, he pursued an original literary vision that combined fiction, history, autobiography and photography and addressed some of the most profound themes of contemporary literature: the burden of the Holocaust, memory, loss and exile.

The first biography to explore his life and work, Speak, Silence pursues the true Sebald through the memories of those who knew him and through the work he left behind. This quest takes Carole Angier from Sebald's birth as a second-generation German at the end of the Second World War, through his rejection of the poisoned inheritance of the Third Reich, to his emigration to England, exploring the choice of isolation and exile that drove his work. It digs deep into a creative mind on the edge, finding profound empathy and paradoxical ruthlessness, saving humour, and an elusive mix of fact and fiction in his life as well as work. The result is a unique, ferociously original portrait.

Carole Angier is the author of Jean Rhys: Life & Work (shortlisted for the Whitbread Prize) and The Double Bond: A Life of Primo Levi. She was educated at the universities of McGill, Oxford and Cambridge. She taught academic and life writing for many years and has edited several books of refugee writing. She is a Fellow of the Royal Society of Literature.

“[Angier has] written an intelligent and intuitive book about a writer who, like certain mountains, has his own weather, and whose career remains a contested site.” - The New York Times

“Angier works like the most dogged of detectives to trace the origins of characters and settings and the way Sebald develops, changes and embellishes his material . . . her arguments, closely marshaled and based on deep thought, are on the whole persuasive.” - The Wall Street Journal

“Nazism was the cataclysmic event whose repercussions defined his [Sebald’s] youth, even if hardly anyone spoke of it . . . His emerging politics—'anti-bourgeois, anti-military, anti-clerical, anti-establishment,’ in Angier’s summation—were part of a broader flourishing . . . Literature became a passion, a rare ember of truth amid the dark cone of silence that surrounded him.” - The New Republic

“Thanks to [Angier’s] exten¬sive research and deep under¬stand¬ing of Sebald’s work, this book will undoubt¬ed¬ly become a valu¬able resource for future Sebald schol¬ars as well. Speak, Silence is a true lit-er¬ary event and a major achievement.” - Jewish Book Council

“Angier . . . recounts Sebald’s insulated childhood in the Bavarian Alps, his growing awareness of German atrocities, his academic career in England, and his sudden success in middle age. In delicate readings of his work, she identifies sources—landlords, family members, schoolteachers, fellow writers and artists—and demonstrates how his writing stemmed from an ineluctable empathy with misfortune and from a persistent, unceasing exploration of historical memory and its limits.” - The New Yorker

"Angier shows the general reader how prone to obfuscation Sebald was: She catches white lies buried in footnotes or tossed out in conversation, as well as deceptions about sources and methods meant to throw critics off his trail." - The Washington Examiner

"Enlightening … an apt assessment of a singular artist." - The Minneapolis Star Tribune

“Angier places great emphasis on the silences that shaped his [Sebald’s] life: the ‘silent catastrophes’ of WWII, the loss of the ‘good silence of his childhood,’ as well as the sources who didn’t agree to speak to Angier, including his wife . . . Sebald fans will find much to consider in this detailed tome.” - Publishers Weekly

“An extraordinary achievement. Carole Angier has been able to capture the genius of Sebald without trapping him in facile definitions, allowing his portrait the many hues and changing angles that those who knew him will recognize as profoundly true.” - Alberto Manguel

“It is a considerable achievement to unpick, so convincingly, mysteries Sebald has taken care to contrive. And to do it with such respect, and indeed generosity, that the great originals are burnished” - Iain Sinclair

“W.G. Sebald so deliberately and cunningly blurs the boundaries between fact and fiction in his books that every reader longs for a clear-eyed guide to what is invented and what is ‘real’, while at the same time dreading the damage this might do to the delicate webs he weaves. Carole Angier’s tireless detective work has cleared up many of the mysteries, both in his life and in his work, while her critical acumen and manifest admiration for the latter ensures that it emerges enhanced rather than diminished from her labours. A riveting book” - Gabriel Josipovici

“[An] enticing and thorough book ... [that] proves that [Seblald] was, in spite of his tragic and early death, an absolute master of the highest domains of literature.” - Javier Marías

"[Angier] is tenacious, unthwartable, courteous, sympathetic, creative in approach ... She places Sebald’s work squarely in the literature of the Jewish Holocaust but when she more subtlety and heroically examines the writing and pursues the quiet, considerably cloaked life, her approach becomes more nuanced, more befittingly complex." -Lit Hub's Book Post