Football and the Law (Paperback) 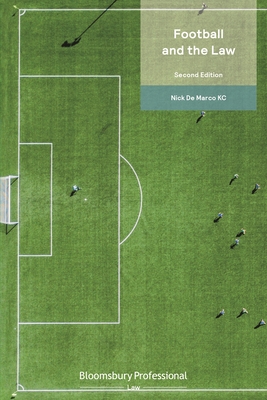 Football and the Law (Paperback)

Football is the biggest game in the world and the richest. This has contributed to the growth of legal issues and disputes in football and to an increasingly specialised legal services market in football. Since 2002, approximately half of all sports disputes before the Court of Arbitration in Sport (CAS) have been in football.

Football and the Law provided the first comprehensive review of the law relating to all aspects of football in the world, including all the main regulatory and commercial aspects of the sport. With contributions from 67 of the leading experts in the field, it is a valuable resource to lawyers and others active in the football industry, as well as a vital source of material to students, legal practitioners and others who wish to learn more about the area. The work includes reference to the key legal principles, cases and regulatory materials relevant to football. The key developments for the 2nd Edition include: - Refiguration of European football/ ESL breakaway / new international structures
- Independent regulation of football - Impact of Brexit Safeguarding - child abuse in football
- Growth of racism and regulatory responses
- FIFA banning 'bridge loans' (relevant to third party ownership)
- FIFA's new plans to regulates agents and cap fees
- Emergence of salary caps in football and legal challenges to them
- Various high profile Financial Fair Play cases Class action in football re head injuries
- Challenges to Owners and Directors test - calls for independent regulator
- New chapter covering developments in CAS cases
Nick De Marco KC of Blackstone Chambers is ranked as one of the leading sports law barristers and the foremost practitioner in football disputes. As well as acting for international and national federations, premier league and international football clubs, players, athletes and their unions, Nick sits as an arbitrator across a number of sports: he is a member of the IAAF Disciplinary Commission, Sports Resolutions' independent Panel of Arbitrators and Mediators and the specialist sports list of arbitrators at the Asian International Arbitration Centre. Legal 500 (2022) said Nick: "has the best working knowledge of the football regulatory landscape of the barristers at the Bar". Nick is a member of the Editorial Board of Law In Sport and of 'Football Legal' and he writes and lectures on sports law issues. He is co-author of 'Challenging Sports Governing Bodies' (Bloomsbury, 2016) the author and General Editor of the first edition of 'Football and the Law' (Bloomsbury, 2018) and he hosts 'The Sports Law Podcast' (in association with Blackstone Chambers). He is a director of the British Association for Sport and the Law (BASL).