The End of the Small Party?: Change UK and the Challenges of Parliamentary Politics (Hardcover) 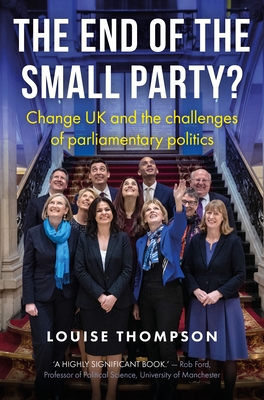 The End of the Small Party?: Change UK and the Challenges of Parliamentary Politics (Hardcover)


Not On Our Shelves—Ships in 1-5 Days
For a brief moment in 2019 Britain's politics looked like it might be transformed. Just when it seemed that the divisions within and across British political parties over Brexit could not get any more intense, 7 Labour and 3 Conservative MPs broke away to form The Independent Group (TIG) - later Change UK. This is the first book to explore the meteoric lifespan of that party, within the wider context of the experiences of other small political groupings in the House of Commons. Ultimately, it shows why the party failed and disbanded after just a few months. Timely and thoroughly researched, Louise Thompson's book takes us deep inside the struggles facing MPs who leave behind the comforts of the large political parties. Drawing on interviews with current and former politicians, it explores the practicalities of being a small party MP in the Commons. What challenges face you? Who can you turn to? And just how can you make an impact? Crisply written for the non-specialist reader, this fascinating book opens a window onto the perilous world of parliamentary politics.
Louise Thompson is a Senior Lecturer in Politics at the University of Manchester. Alongside her academic research she has written for a range of publications, including The Conversation and the Independent.