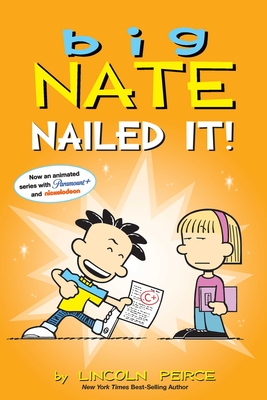 This is book number 28 in the Big Nate series.

The newest pranks, adventures, and school drama from Big Nate, now an animated series on Paramount+ and Nickelodeon!

Big Nate is a legend at P.S. 38, where he and friends Francis, Teddy, Dee Dee, Chad, and others manage to make sixth grade interesting with all kinds of pranks, drama, sports, and good times. The all-time leader in detentions, Nate is never far from the spotlight, whether it's for a freak injury on the soccer field, Halloween costume fail, or stirring up a new episode in his long-running rivalry with grade-grubbing Gina or his teacher nemesis, Mrs. Godfrey. This new collection of Big Nate comics from Lincoln Peirce includes over 170 full-color comics and abundant laughs for the whole family, especially young readers ages 8 to 12.
Lincoln Peirce has been drawing the Big Nate comic strip for more than 20 years. Born in Ames, Iowa, Peirce grew up in Durham, New Hampshire. As a kid, he began creating his own strips in the sixth grade. Peirce taught high school in New York City and has created several animated pilots for Cartoon Network and Nickelodeon. He lives in Portland, Maine, with his family.