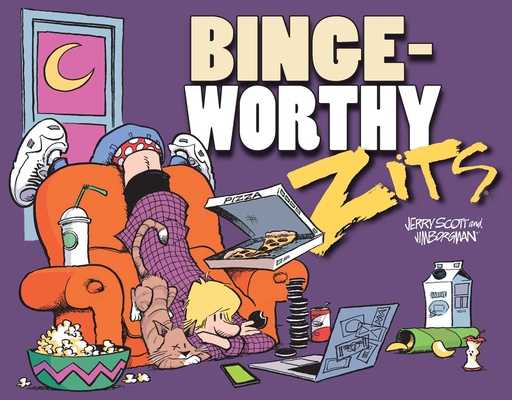 Featuring the complete Zits comics from 2020, the newest treasury by award-winning duo Jerry Scott and Jim Borgman is filled with zaniness, wit, and relatable comedic truths about being — and raising — a teenager.

Featuring the award-winning combination of Jerry Scott's trademark humor and Jim Borgman's brilliant line art, Zits is the perfect comic for anyone parenting a teenager, or who remembers the days of sleeping in until noon, subsisting entirely on pizza, and rehearsing for an arena rock tour from the cozy confines of the garage. This fantastic Zits treasury presents the timeless teenage antics of Jeremy and friends and the trials of his Baby Boomer parents. Filled with lessons about growing up and growing older, this book contains so many laughs it will make your sides hurt.
Jerry Scott is the co-creator of the award-winning comic strip Zits. He lives in central coastal California. Jerry's work on Baby Blues has delighted fans and wowed the cartooning world since he launched the strip with Rick Kirkman in 1990.


Co-creator Jim Borgman and his wife are the proud parents of five children. He has also won a Reuben Award and a Pulitzer Prize. Both he and Jerry have LOTS of experience with teenagers.