The Divine Miss Marble: A Life of Tennis, Fame, and Mystery (Paperback) 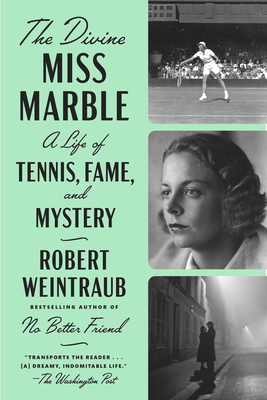 The Divine Miss Marble: A Life of Tennis, Fame, and Mystery (Paperback)


In Stock—Click for Locations
“In Robert Weintraub’s exhaustive biography, The Divine Miss Marble, he transports the reader into Marble’s vibrant world. It’s a dreamy, indomitable life worth reading about as today’s tennis tries to return to form.”—The Washington Post

“Delightful and engrossing, this is a must for tennis fans.”—Publishers Weekly

The story of 1930s tennis icon Alice Marble, and her life of sports, celebrity, and incredible mystery

Who was Alice Marble?

In her public life, she was the biggest tennis star of the pre-war era, a household name like Joe DiMaggio and Joe Louis. She was famous for overcoming serious illness to win the biggest tournaments, including Wimbledon. She was also a fashion designer and trendsetter, a contributor to a pioneering new comic called Wonder Woman—and friend to the biggest names in Hollywood and society, like Carole Lombard and Clark Gable, William Randolph Hearst and Marion Davies, and members of families named Bloomingdale, Loew, and du Pont. She helped integrate tennis with her support of Althea Gibson, and even coached two young women who became stars in their own right: Billie Jean King and Sally Ride.

Yet her private life provoked constant speculation while she was alive, and her own memoirs added layers of legend upon stories. According to Alice, she married a man who was killed in the skies over Europe during World War II. But who was the man she loved, and had he even existed? She was widely known for her patriotism during World War II. Had she really nearly given her life for her country as a spy, shot during a wild car chase fleeing foreign espionage agents?

In The Divine Miss Marble, bestselling author Robert Weintraub traveled the country to uncover her fascinating story. And the more he learned about her, the more her mysteries and contradictions deepened. Alice was a powerful woman who knew her worth, demanding equal pay to men decades earlier than other female athletes; yet she was held in sway by a domineering, highly successful coach with whom she had a volatile relationship. She was renowned for her California style, and had a brilliant mind and the guts to overcome a lifetime of physical trauma.

For the first time here, we come closer than ever before to the truths of this unforgettable life, and somehow it’s a story even more extraordinary than everything we already know about the divine Alice Marble.
Robert Weintraub has written about sports for Slate, Play, ESPN.com, The Guardian, Deadspin, and many more. He is the author of four books, including The Divine Miss Marble and New York Times bestseller No Better Friend. Weintraub lives in Decatur, Georgia, but he grew up in the large shadow cast by Yankee Stadium, in Rye, New York.
Praise for The Divine Miss Marble
“In Robert Weintraub’s exhaustive biography, The Divine Miss Marble, he transports the reader into Marble’s vibrant world. It’s a dreamy, indomitable life worth reading about as today’s tennis tries to return to form.”—The Washington Post

“Delightful and engrossing, this is a must for tennis fans.”—Publishers Weekly

“[Weintraub] skillfully provides the historical and social contexts for Marble’s life, and his sketches of her contemporaries, particularly Tennant, are enlightening. The author also deftly sprinkles his narrative with charming anecdotes. . . . 'You only live once, and that woman lived,' Rita Mae Brown once said. Weintraub ably conveys this sentiment.”—Kirkus Reviews

“A fascinating portrayal of one of America’s very first athletic starlets.”—BookPage

“The Divine Miss Marble brings to light the fascinating life of a forgotten champion, embellishments and all, and takes readers on a journey through tennis history before the Open Era.”—Tennis View Magazine

"With the US Open starting, Papa Clicker has a review for a sport he still plays at seventy-five. The Divine Miss Marble is about Alice Marble’s rise from a humble childhood, overcoming serious illness to become the best player in the world, which included Open and Wimbledon titles. It also takes the reader back to Hollywood life of the '30s and World War II. The book receives 4.3 out of 5 clickers."—New York Post