Russian Aggression in Eastern Europe: Where Does Putin Go Next After Ukraine, Georgia, and Moldova? (Paperback) 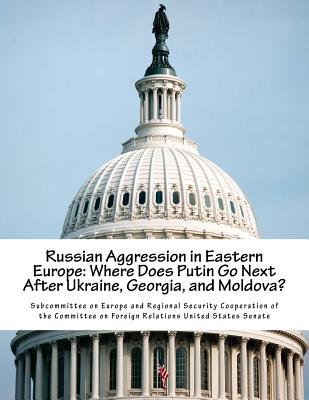 Russian Aggression in Eastern Europe: Where Does Putin Go Next After Ukraine, Georgia, and Moldova? (Paperback)

By Subcommittee on Europe and Regional Secu


Not On Our Shelves—Ships in 1-5 Days
(This book cannot be returned.)
In March 2014, with hardly any pushback from the West, Crimea was annexed by Russia. Prime Minister Yatsenyuk came to America that same year asking for our help in his country's battle to ensure its territorial integrity. Providing military equipment to Ukraine is not the only answer, but it is a necessary part of the answer. America needed to show resolve then, and it desperately needs to show leadership and strength now, not only in Ukraine but around the world. On December 5, 1994, the Budapest Memorandum was signed by Ukraine, Russia, the United States and the United Kingdom. In this agreement, Ukraine gave up the world's third-largest nuclear weapons stockpile in return for security assurances against threats or the use of force against its territorial integrity and political independence. Only 20 years later, Russia has blatantly broken its promise by brazenly violating the territorial integrity of Ukraine. No one should be surprised by this behavior from Russian President Vladimir Putin. Under his leadership, Russian aggression against its neighbors has been building for years.