The Sisters Are Alright, Second Edition: Changing the Broken Narrative of Black Women in America (Paperback) 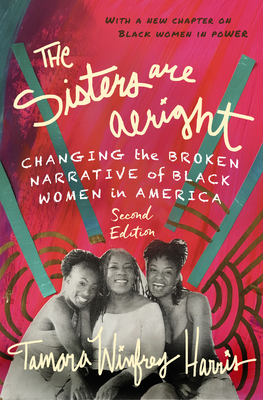 The Sisters Are Alright, Second Edition: Changing the Broken Narrative of Black Women in America (Paperback)


In Stock—Click for Locations
A slew of harmful stereotypes continues to follow Black women. The second edition of this bestseller debunks vicious misconceptions rooted in long-standing racism and shows that Black women are still alright.

The latest edition of this bestseller features new interviews with diverse Black women about marriage, motherhood, health, sexuality, beauty, and more. Alongside these authentic experiences and fresh voices, Winfrey Harris explores the evolution of stereotypes of Black women, with new real-life examples, such as the rise of blackfishing and digital blackface (which help white women rise to fame) and the media’s continued fascination with Black women’s sexuality (as with Cardi B or Megan Thee Stallion).

The second edition also includes a new chapter on Black women and power that explores how persistent stereotypes challenge Black women’s recent leadership and achievements in activism, community organizing, and politics. The chapter includes interviews with activists and civic leaders and interrogates media coverage and perceptions of Stacey Abrams, Vice President Kamala Harris, and others.

Winfrey Harris exposes anti–Black woman propaganda and shows how real Black women are pushing back against racist, distorted cartoon versions of themselves. She counters warped prejudices with the straight-up truth about being a Black woman in America.
Tamara Winfrey Harris is a writer whose work has appeared in the Chicago Sun-Times, In These Times, and Ms. and Bitch magazines and online at the American Prospect, Salon, the Guardian, Newsweek/Daily Beast, xoJane, the Huffington Post, Psychology Today, Clutch magazine, and Change.org. She has been called to address women’s issues in major media outlets, such as NPR’s Weekend Edition. The Sisters Are Alright is Foreword Reviews’ 2015 INDIEFAB Book Awards in Women’s Studies.
Praise for the second edition:

“The Sisters Are Alright is a brilliant example of Tamara Winfrey Harris’s unique alchemy: bold writing and astute cultural analysis with Black women unapologetically centered. Here is the Black woman’s experience rendered with grace, beauty, and righteous anger. Read this and know us more fully.”
—Deesha Philyaw, author of The Secret Lives of Church Ladies

“While it is fashionable to say ‘Believe Black women,’ for those who mean it, believe Tamara Winfrey Harris. She speaks for us, and when she says ‘the sisters are alright,’ she has our proxy and puts respect on our names. She writes in the tradition of those Black women whose job it is to hold the sacred spaces of our humanity, telling the world who we are not just politically, as the women who save democracy or flip Georgia, but who we are to ourselves and to each other. Who we are interpersonally, intellectually, spiritually, sexually. How we move our bodies and run through our own minds and how we’ve had to walk, sometimes dance, sometimes trip through the world. Toni Morrison once wrote that the Black woman ‘may very well have invented herself,’ and chapter by chapter, with historical complexity and contemporary context, Tamara Winfrey Harris tells you just how all that self-invention gets done and all the ways it remains a beautiful, elaborate ongoing project.”
—Lonnae O’Neal, journalist and Senior Writer, ESPN’s The Undefeated

“No one should have to tell Black women that nothing is wrong with them. But thank God that Tamara Winfrey Harris does. And The Sisters Are Alright: Changing the Broken Narrative of Black Women in America does more than change the narrative. It gives that mythical, false, diminished narrative the funeral it deserves--powerful, decisive, heartbreaking, and final.”
—Rochelle Riley, author of The Burden and coauthor of That They Lived

“Black women deserve everything, but it is not often that we get even a portion of what is owed to us. In the second edition of The Sisters Are Alright, using historical references and current events sewn into fabric made up of the diverse voices of Black women, Tamara Winfrey Harris again proves that she writes for us. Her work encompasses the fullness of the Black woman experience. In this book, Black women will find our challenges, our triumphs, and our Black girl joy. This book is truly the gift we always needed but never knew we would get.”
—Dr. Tyffani Monford Dent, psychologist and author of Black Girl and You Got This!

“Society continues to deride and disrespect Black women. Tamara Winfrey Harris not only rejects that narrative; she rewrites it. In Sisters, Tamara brings to life the change she wants to see—not just for herself but for all Black women.
—Dr. Carolyn Strong, educator and author of Black Girl Blues

Praise for the first edition:

“This energetic, passionate, and progressive mission statement illuminates old stereotypes that continue to dog black women today. Winfrey-Harris amplifies the voices of African-American women speaking for themselves, and the results are powerful, relevant, and affirming.”
-Publishers Weekly

“Using a combination of anecdotal evidence, historical research, and well-documented facts and studies, Harris has compiled an engaging and informative treatise on black womanhood in America.”
-Lori L. Tharps, The Washington Post

“The Sisters Are Alright enters a space where we’re publicly contemplating race — and blackness in particular — quite a bit lately. That public contemplation has been fraught with a mixture of frustration, grief and anger at the way black people are treated and the way black bodies are viewed in the United States.”
-Soraya Nadia McDonald, The Washington Post

With its insightful blend of personal narrative, cultural critique and reflective interview, your book follows in the critical and literary footsteps of such feminist/womanist writers as Michele Wallace, Patricia Hill Collins and bell hooks.  Similar to these authors, you unpack the often damaging effect the myth of the self-sacrificing black superwoman has on black women’s mental health and wellness.”
-Sikivu Hutchinson, The Feminist Wire

“One of the things I loved about [this] book was how it emphasized how self-love could help radically shift some of these perspectives. [This] book really tackles specific stereotypes that shape the way American culture perceives black women.”
-Arielle Bernstein, Rumpus

“Through explorations of marriage, motherhood, health, sexuality, beauty and more, Tamara Winfrey Harris counters warped prejudices by going far beyond the trope of Black women portrayed in American media. The Sisters Are Alright exposes anti–Black-woman propaganda and shows the truth of what it’s like to be a Black woman in America, a counter-narrative to the distorted depictions of themselves Black women are so often subject to.”
-Amani Ariel, Blavity

“The book pairs Harris' impeccable writing with stories of Black women and how they have been shaped by the stereotypes that are dictating how we view those around us.”
-Emily Taylor, NUVO

“[Winfrey Harris] speaks to real Black women, relaying the fact we are not as broken as society paints us to be. After all, we are the fastest growing group of entrepreneurs in America, we have to be doing something right.”
-Chelcee Johns, Madame Noir

“The Sisters Are Alright invites Black women, and those who love and care about Black women to reject this age-old stereotype in favor of a more expansive and progressive notion of women’s sexuality.”
-Susana Morris, About News

“Winfrey Harris’ book comes with us, both the celebrities and the sistahgurl down the street, letting us speak our own lives to power in this moment on our own terms.”
-Andrea Plaid, Feminist Wire

“Winfrey-Harris uses her distinctive voice to explore how Black women are thriving despite the odds stacked against us. She explores everything from marriage to sexuality in a way that will definitely cause affirmative head nods as reading.”
-Evette Dionne, Clutch Mag

“Tami Winfrey Harris provides some answers from both a historical and contemporary perspective. She argues that because of a pervasive public opinion about black women, assaults against them are often not perceived as newsworthy.
Winfrey Harris’s book shows us that public representations of black women can be beneficial when the women involved are in control.”
-Laina Dawes, Hazlitt

“This book is a gift. With just the right mix of sister wit, statistical information, and a few well-timed rhetorical side-eyes, The Sisters Are Alright rushes in to save black women from the stereotypes that threaten to dull our shine.”
—Brittney Cooper, PhD, Assistant Professor of Women’s and Gender Studies and Africana Studies, Rutgers University

“Winfrey Harris [digs] into the project of remaking representations of black women as they truly are—joyfully diverse, indelibly complex, and powerful architects of their own narratives."
—Andi Zeisler, cofounder and Editorial/Creative Director, Bitch Media

“Winfrey Harris sets the record straight. This is a love letter to all the sisters—beautifully human and gorgeously flawed. Reading this book I felt seen, heard, and deeply understood. This is self-care between two covers.”
—Tayari Jones, author of Silver Sparrow