In Pursuit of a Legend: 72 Days in California Bigfoot Country (Paperback) 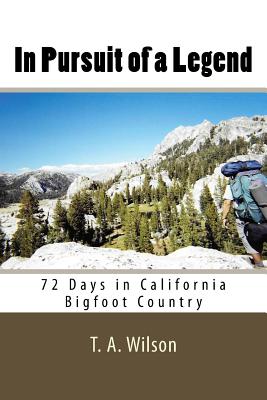 In Pursuit of a Legend: 72 Days in California Bigfoot Country (Paperback)


Not On Our Shelves—Ships in 1-5 Days
(This book cannot be returned.)
Backpacking into the heart of California Bigfoot Country, a wildland firefighter and an alienated writer seek evidence of the legendary Bigfoot. They hope to solve the mystery-for themselves if no one else. An early track find of 21-inch footprints offers as much intrigue as it does doubt. Are they even prepared to believe in the creature that may have left the tracks? And what to make of grunts late into the night and rocks being smashed together? This is their true story unlike any other. It is a side of nature-and mankind-unknown to all but a very few. The second edition includes a new introduction and afterword by the author.
T.A. Wilson is also the author of Bigfoot in Evolutionary Perspective: The Hidden Life of a North American Hominin. He was featured in the short documentary Bigfoot and the Rebel. He has advanced degrees in writing and information science, and works in multiple fields, including academia, often independently.