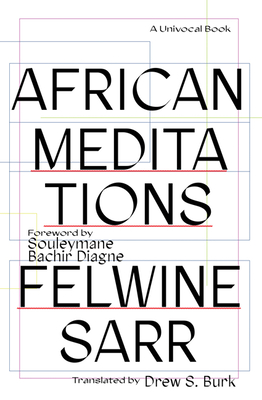 The call to morning prayer. A group run at daybreak along the Corniche in Dakar. A young woman shedding tears on a beach as her friends take a boat to Europe. In African Meditations, paths to enlightenment collide with tales of loss and ruminations, musical gatherings, and the everyday sights and sounds of life in West Africa as a young philosopher and creative writer seeks to establish himself as a teacher upon his return to Senegal, his homeland, after years of study abroad.

A unique contemporary portrait of an influential, multicultural thinker on a spiritual quest across continents—reflecting on his multiple literary influences along with French, African Francophone, and Senegalese tribal cultural roots in a homeland with a predominantly Muslim culture—African Meditations is a seamless blend of autobiography, journal entries, and fiction; aphorisms and brief narrative sketches; humor and Zen reflections.

Taking us from Saint-Louis to Dakar, Felwine Sarr encounters the rhythms of everyday life as well as its disruptions such as teachers’ strikes and power outages while traversing a semi-surrealistic landscape. As he reacclimates to his native country after a life in France, we get candid glimpses, both vibrant and hopeful, sublime and mundane, into his Zen journey to resecure a foothold in his roots and to navigate academia, even while gleaning something of the good life, of joy, amid the struggles of life in Senegal.

Felwine Sarr—philosopher, economist, novelist, musician—is Anne-Marie Bryan Chair of French and Francophone studies at Duke University. He is author of Afrotopia (Minnesota, 2019) and coauthor of the groundbreaking report commissioned by French President Emmanuel Macron, “The Restitution of African Cultural Heritage: Toward a New Relational Ethics.”

Drew S. Burk has translated more than a dozen books of philosophy and theory from the French, including Felwine Sarr’s Afrotopia and Frédéric Neyrat’s The Unconstructable Earth, which won the 2019 French Voices Award First Prize for translation.

"The following meditations are to be read so as to remind us that thought is not the product of some disincarnated spirit at rest but is rather a practice and activity of a body in movement."—Souleymane Bachir Diagne, from the Foreword

"African Meditations speaks of the earth: how we inhabit it and connect to its most elementary forces. It aphoristically reflects on happiness but ponders its fragmentary nature and precariousness. Felwine Sarr shows us the good life and suggests that, in Senegal and beyond, it often takes the path of ‘motionless pilgrimages.’ A wise and richly evocative book."—Pierre-Philippe Fraiture, University of Warwick