Uproarious: How Feminists and Other Subversive Comics Speak Truth (Paperback) 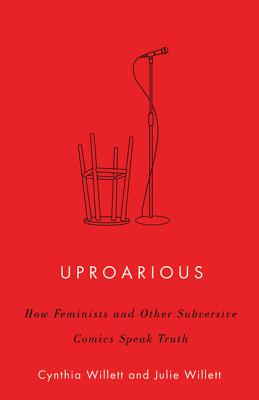 Uproarious: How Feminists and Other Subversive Comics Speak Truth (Paperback)


Special Order—Subject to Availability
A radical new approach to humor, where traditional targets become its agents

Humor is often dismissed as cruel ridicule or harmless fun. But what if laughter is a vital force to channel rage against patriarchy, Islamophobia, or mass incarceration? To create moments of empathy and dialogue between Black Lives Matter and the police? These and other such questions are at the heart of this powerful reassessment of humor. Placing theorists in conversation with comedians, Uproarious offers a full-frontal approach to the very foundation of comedy and its profound political impact.

Here Cynthia Willett and Julie Willett address the four major theories of humor—superiority, relief, incongruity, and social play—through the lens of feminist and game-changing comics such as Wanda Sykes, Margaret Cho, Hannah Gadsby, Hari Kondabolu, and Tig Notaro. They take a radical and holistic approach to the understanding of humor, particularly of humor deployed by those from groups long relegated to the margins, and propose a powerful new understanding of humor as a force that can engender politically progressive social movements. Drawing on a range of cross-disciplinary sources, from philosophies and histories of humor to the psychology and physiology of laughter to animal studies, Uproarious offers a richer understanding of the political and cathartic potential of humor.

A major new contribution to a wider dialogue on comedy, Uproarious grounds for us explorations of outsider humor and our golden age of feminist comics—showing that when women, prisoners, even animals, laugh back, comedy along with belly laughs forge new identities and alter the political climate.

Cynthia Willett is Samuel Candler Dobbs Professor of Philosophy at Emory University. Her books include, most recently, Interspecies Ethics and Irony in the Age of Empire: Comic Perspectives on Freedom and Democracy.

Julie Willett is associate professor of history at Texas Tech University. She is author of Permanent Waves: The Making of the American Beauty Shop.

"What happens when a professor of philosophy and a professor of history walk into a comedy club? If these professors are Cynthia Willett and Julie Willett, they write a brilliantly astute, acutely insightful, and sharply original book on gender, politics, ethnicities, empathy, humanism, and humor. In Uproarious, they stand up for the power of stand up, with Wanda Sykes, Margaret Cho, Hannah Gadsby, Hari Kondabolu, and Tig Notaro headlining their deeply erudite arguments. The result is an intellectual riot, overturning shibboleths and raising the roof—while breaking the glass ceiling—of ideas about women and comedy."—Gina Barreca, author of “If You Lean In, Will Men Just Look Down Your Blouse?”: Questions and Thoughts for Loud, Smart Women in Turbulent Times

"Cynthia Willett and Julie Willett take the reader on a delightful and inspiring voyage into the belly of satire, comedy, and laughter. While we may have a visceral sense of humor’s powers, philosophy has not yet found the language for it. In giving us just that, Uproarious expands our understanding of feminist and race politics and exposes dimensions of sociality, embodiment, and empathy that carry rich (and, yes, humorous!) implications for critical theory and aesthetics."—Monique Roelofs, author of The Cultural Promise of the Aesthetic

"If you think humans are the only animals with a sense of humor, Uproarious surely will break you out of your misleading speciesist perspective. There's a lot we can learn from other animals about how and why humans' sense of humor evolved. This wide-ranging, transdisciplinary, and future-looking collection of essays nicely lays the groundwork for stimulating discussions freed from human exceptionalism."—Marc Bekoff, University of Colorado