Architectures of the Unforeseen: Essays in the Occurrent Arts (Paperback) 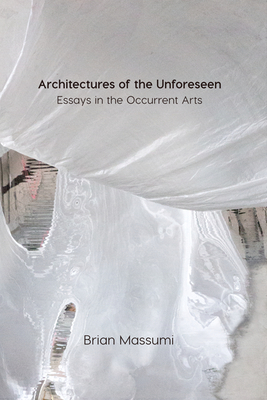 Architectures of the Unforeseen: Essays in the Occurrent Arts (Paperback)

A beautifully written study of three pioneering artists, entwining their work and our understanding of creativity


Bringing the creative process of three contemporary artists into conversation, Architectures of the Unforeseen stages an encounter between philosophy and art and design. Its gorgeous prose invites the reader to think along with Brian Massumi as he thoroughly embodies the work of these artists, walking the line that separates theory from art and providing equally nurturing sustenance for practicing artists and working philosophers.

Based on Massumi’s lengthy—and in two cases decades-long—relationships with digital architect Greg Lynn, interactive media artist Rafael-Lozano Hemmer, and mixed-media installation creator Simryn Gill, Architectures of the Unforeseen delves into their processes of creating art. The book’s primary interest is in what motivates each artist’s practice—the generative knots that inspire creativity—and in how their pieces work to give off their unique effects. More than a series of profiles or critical pieces, Massumi’s essays are creative, developing new philosophical concepts and offering rigorous sentiments about art and creativity.

Asking fundamental questions about nature, culture, and the emergence of the new, Architectures of the Unforeseen is important original research on artists that are pioneers in their field. Equally valuable to the everyday reader and those engaged in scholarly work, it is destined to become an important book not only for the fields of digital architecture, interactive media, and installation art, but also more basically for our knowledge of art and creativity.

Brian Massumi is the author of numerous works across philosophy, political theory, and art theory. His publications include 99 Theses on the Revaluation of Value: A Postcapitalist Manifesto (Minnesota, 2018); Semblance and Event: Activist Philosophy and the Occurrent Arts; and Parables for the Virtual: Movement, Affect, Sensation.

"Architectures of the Unforeseen makes an invaluable contribution to the fields of art history and philosophy by providing a close reading of the interplay between space and embodiment in the works of Greg Lynn, Rafael Lozano-Hemmer, and Simryn Gill. Considering the artists' respective projects within a philosophical framework for architecture, site-specificity, place making, and translocal practice, Brian Massumi traces points of intersection between the works in intriguing ways. His highly original interpretations stage encounters between philosophical and art practice, opening up transformative spaces of becoming that illuminate both disciplines."—Christiane Paul, The New School

"When describing his process of writing in the Concluding Remarks, I couldn’t help thinking of that of making mille-feuille for which the dough has to be stretched and folded back into itself multiple times in order to finally achieve the delicate, fine-layered pastry. Intricate, not straight forward, to be revisited. And although Massumi’s book is classified under art history and visual culture, praised for its ‘invaluable contribution’ to the first, it at times resembles more a physics book due to the extensive description of the processes followed by the artists. Close reading resulting in dense, at times very poetic writing. An artwork, or process, in itself, perhaps."—Leonardo Reviews

"Here the ‘transduction’ between artistic and philosophical issues becomes an intellectual exercise that easily succeeds."—Neural