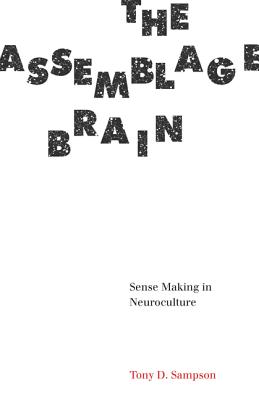 Once upon a time, neuroscience was born. A dazzling array of neurotechnologies emerged that, according to popular belief, have finally begun to unlock the secrets of the brain. But as the brain sciences now extend into all corners of cultural, social, political, and economic life, a yet newer world has taken shape: “neuroculture,” which goes further than ever before to tackle the profound ethical implications we face in consequence.

The Assemblage Brain unveils a major new concept of sense making, one that challenges conventional scientific and philosophical understandings of the brain. Drawing on Deleuze and Guattari, Tony D. Sampson calls for a radical critical theory that operates in the interferences between philosophy, science, art, and politics. From this novel perspective the book is structured around two questions: “What can be done to a brain?” and “What can a brain do?” Sampson examines the rise of neuroeconomics in informing significant developments in computer work, marketing, and the neuropharmaceutical control of inattentiveness in the classroom. Moving beyond the neurocapitalist framework, he then reestablishes a place for proto-subjectivity in which biological and cultural distinctions are reintegrated in an understanding of the brain as an assemblage.

The Assemblage Brain unravels the conventional image of thought that underpins many scientific and philosophical accounts of how sense is produced, providing a new view of our current time in which capitalism and the neurosciences endeavor to colonize the brain.

Tony D. Sampson is reader in digital culture and communications at the University of East London. He is author of Virality: Contagion Theory in the Age of Networks (Minnesota, 2012).

"The Assemblage Brain provides a much-needed critique of the black-box, computational brain that has been a staple in philosophy, science, and the arts and connects the dots between recent innovations in science, dystopian literature, and theoretical developments in contemporary philosophy."—David Gunkel, author of The Machine Question: Critical Perspectives on AI, Robots and Ethics

"‘Tap my head and mike my brain’; Tony Sampson’s new book might silently echo Pynchon’s famous lines, but this is also an original, inspiring, and theoretically savvy take on the culture of the affective brain, from sciences to business, cybernetics to political power. Warmly recommended."—Jussi Parikka, author of Insect Media: An Archaeology of Animals and Technology