The Perils of Extremism: How I Left the Oath Keepers and Why We Should be Concerned about a Future Civil War (Hardcover) 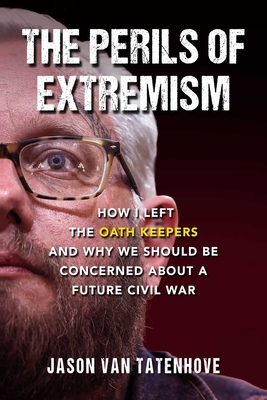 The Perils of Extremism: How I Left the Oath Keepers and Why We Should be Concerned about a Future Civil War (Hardcover)


Coming Soon—Pre-Order Now
An explosive behind the scenes look at the Oath Keepers: what makes them tick, who they are, and what they REALLY stand for.

The Oath Keepers first made a name for themselves with the infamous Bundy Ranch standoff in 2014. They have continued through to the US Capitol insurrection in early 2021. The Oath Keepers—including many former military members—have become one of the largest anti-government extremist groups in the United States, labeled one of the most dangerous domestic terror threats by the FBI.

There have been countless articles and a few books written about the group, but nothing like this. Author Jason Van Tatenhove knows them from the inside. The Perils of Extremism is a first-hand account of the aging punk-rock journalist from Colorado as he was embedded with Stewart Rhodes and that most infamous militia, the Oath Keepers, as well as details from his time testifying to the United States House Select Committee on the January 6 Attack both in person live on TV on July 12, 2022 and during three and a half hours of taped deposition in March 2022.

Jason takes the readers along on a journey that started with the Bundy Ranch Stand-off and continued with two more armed standoffs in Oregon and Montana. Jason was then offered a job as the national media director and associate editor for the Oath Keepers. He moved his family up to the Eureka, Montana area to start his job, where he found himself in a "who’s who" of right-wing extremism. Jason even struck up a friendship with Stewart Rhodes when Stewart lived in Jason’s basement for several months. Stewart confided in him about his actual beliefs and about how much of what he says publicly is to sell more memberships.

Jason ultimately broke ties with the ever-radicalizing anti-government militia group when they begin to embrace the ideology of American Nazis and began associating with the spokesperson for the Alt-Right, Richard Spencer. From there, Jason began speaking out against the dangers of the extremist militia and tried to make amends in his life for being a part of something that led in part to the January 6 insurrection. Readers will also journey with Jason as he begins to be featured in documentaries, feature articles, and national news coverage as he speaks out against violent extremism. As mentioned, this book will also include his experiences testifying to congressional investigators.
Raised by artists and computer programmers, Jason Van Tatenhove gravitated toward the punk and grunge scenes in Colorado. His literary hero was Hunter S. Thompson and, when he had a chance to embed with the most infamous militia of our day, he jumped at the chance: wanting to write his own Hell’s Angels.